Ending the Cycle: A new study could break one woman’s lifetime of addiction 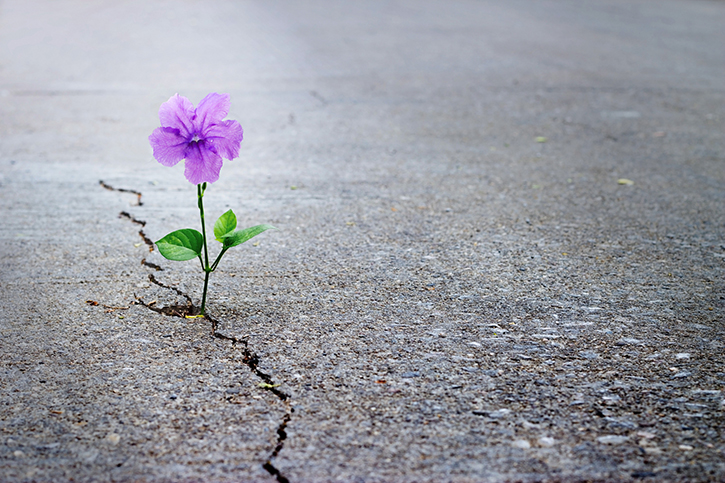 The odds appeared to be stacked against Leah* from the beginning. Raised by addicted parents, she started drinking at age 13. By 16, she was using Ecstasy at rave parties several times a week. She dropped out of school.

Then she tried crystal methamphetamine.

“I was partying hard with my neighbors, and it was crazy — they were seeing people in trees. I loved it. It made me feel like Superwoman. I could accomplish anything, and I was getting everything done,” she remembers.

However, the reality was that meth would slowly, relentlessly, take over her life, as she became one of 684,000 Americans who have a methamphetamine use disorder according to the U.S. Department of Health and Human Services. In Houston, the U.S. Drug Enforcement Administration ranks meth as the No. 1 threat. The rate of death from meth-related overdoses more than doubled from 1,388 in 2010 to 3,728 in 2014.

Leah’s journey through addiction is a story full of self-blame, recriminations, imprisonment and backslides. But in the end, it is also a tale of hope, perseverance, self-awareness, new thinking, forgiveness, redemption and sobriety.

Because she grew up in a home with parents who used drugs, “it was normalized for her,” says Angela Heads, PhD, a licensed psychologist and assistant professor in the Department of Psychiatry and Behavioral Sciences at McGovern Medical School at The University of Texas Health Science at Houston (UTHealth). “It is a way to cope with everything, good or bad. When something good happens, you use it to celebrate. If something bad happens, you use it to feel better.”

Beating an addiction to meth can be especially difficult, says Joy Schmitz, PhD, the Louis A. Faillace, M.D., Professor in the Department of Psychiatry and Behavioral Sciences at McGovern Medical School, in part because there is no approved medication treatment for the addition.

“Methamphetamine is one of the most highly addictive and destructive drugs on the illicit market,” Schmitz explains. “It affects the brain by increasing levels of dopamine and causes changes in the brain’s functioning.”

Unlike cocaine, another stimulant that has a similar effect, methamphetamine stays in the brain longer, leading to prolonged effects before the inevitable crash. Increased use can lead to high blood pressure, an irregular heartbeat, hyperthermia, convulsions and death. Chronic users can develop anxiety, confusion, mood disturbances and violent behavior. Areas of the brain linked to emotion and memory can suffer permanent damage.

When she learned she was pregnant with her first child, Leah used that knowledge to quit meth cold turkey and vowed she was done with drugs.

“I told myself I would never touch it again because I knew, had I not gotten pregnant, my life would have been done there because I liked it so much,” she says. “Meth was the one thing that I couldn’t resist. Anything else I’ve ever tried in the past, I’ve been able to stop, put down. So my son was a blessing.”

Unfortunately, the pain relief prescribed for her after a cesarean section led her down another path — to Vicodin, which includes the dangerously habit-forming ingredient hydrocodone — an opioid. She learned the pills wouldn’t help her become the “perfect mom” she thought they would and sought to beat the addiction with help from a physician, who prescribed Suboxone, a combination of buprenorphine and naloxone that acts as an opioid blocker.

She had another child, began taking college courses and things seemed to be rolling along fine. However, when she was 31, life took another turn — one that would take her back to methamphetamine.

“My husband and I were about to separate and get a divorce, and my parents-in-law moved in because my mother-in-law had dementia. I was trying to take care of this all at one time, and someone gave me Adderall one day and that was the end of that,” she says.

Meth is a stimulant like Adderall, which is prescribed to treat attention deficit hyperactivity disorder (ADHD). Also like methamphetamine, it seemingly gave Leah the boost she thought she needed to be Superwoman. And like meth, it was highly addictive for her.

There were severe consequences for the high, and Leah’s health took a dive.

“A person who uses it regularly can have a psychotic break and begin feeling, hearing or seeing things,” says Michael Weaver, MD, professor in the Department of Psychiatry and Behavioral Sciences at McGovern Medical School. “They can develop tactile hallucinations and feel like bugs are crawling on them, scratching to the point where they develop large sores.”

“I was taking 12 to 15 pills a day and I got down to 97 pounds. I started seeing bugs come out of my face. I picked my face like crazy. I had sores. I mean, I looked like I had a death sentence,” she remembers. “Your brain is so scattered. At first, you feel like you can conquer the world, but that definitely dwindles down when you’ve been up for a couple of days, unable to sleep and looking really bad.”

She tried to kick the addiction again and went into a drug rehabilitation program, but it didn’t stick.

“When I got out, I didn’t have energy. I couldn’t get out of bed, so I took some Adderall again,” she says. “And then somebody had some meth. I knew better. I was on meth for two years. I lost everything — my job, my home, my car. But I bought some stuff from an undercover narcotics agent, and I was arrested.”

After her arrest, Leah moved in with her parents and cleaned up for three months. The felony charge was reduced to a misdemeanor and life, once again, seemed to even out.

“Life had started going good again. When life starts going good again and you get money in your pocket and you get the things you were wanting back…things get stagnant, I guess, is how I would put it. So I just had the urge to do it and I knew I shouldn’t do it but I did,” Leah says.

“One of the longstanding misconceptions about addiction is that it is a problem of will, a problem of character,” explains Scott D. Lane, PhD, professor and vice chair for research in the Department of Psychiatry and Behavioral Sciences at McGovern Medical School, who studies the biology behind addiction. “When we can show how the brain of someone suffering from addiction is different from someone who isn’t, that’s a biological abnormality; it’s not a problem of character. Then, we can move forward, merging biological and cognitive science to address a widely misunderstood problem.”

A stint in the Harris County jail and the threat of losing her children sank Leah to the proverbial rock bottom.

“I thought, ‘This is not me.’ I’ve always tried to be the best mom I could be. When I was sitting there in jail, it was a real revelation. I did not want this life anymore,” she says.

She was clean for two months and then — despite all her promises and good intentions — used meth again.

“And then a week later, I heard the UTHealth message on the radio, and I felt like it was speaking to me. And I called,” she says.

The message was about a study at the Center for Neurobehavioral Research on Addiction, where Schmitz is the center director, Weaver is the medical director and Lane is director of its neurobehavioral laboratory.

The center is one of just seven sites for the study as part of the National Institute on Drug Abuse Clinical Trials Network. Through funding from a $930,000 grant, the clinical trial is examining whether a combination of naltrexone and bupropion works better than placebo to help methamphetamine addiction.

Now researchers are hoping this drug combination, which showed promise in two small pilot studies, demonstrates its efficacy against meth addiction in this larger national study.

“Unfortunately, effective treatment options for methamphetamine dependence are extremely limited,” Schmitz says. “This multisite study could have a huge impact on improving treatment of methamphetamine addiction by studying a promising new medication combination.”

For people like Leah, it offers hope of beating a lifetime of addiction, recovery and relapse. She doesn’t know if she received the drug combination or the placebo, but she isn’t using any drugs, including methamphetamine.

In addition, she didn’t experience the usual crash.

“I was tired, but wasn’t down like I usually am,” she says. “It helped me to not be sick, to get through that depressed time, that first two weeks when you’d do anything to get high really, just to feel normal. The study kept me where I needed to be, and the longer you put between drugs and using, it gives you that time to get clean. It doesn’t matter if I was on the placebo because I’m clean today.”

Leah is also going to behavioral therapy set up by her probation officer.

“What they teach us in therapy is that you have an allergy, a certain type of allergy, and when we put the drug inside of us, we have this obsession that we want to control and enjoy it,” she says. “I thought I could maintain using and live normally. I thought I could control it; I thought I was different. But it just destroys my life, is all it does.”

For now, Leah is living the adage “one day at a time” and rediscovering her life.

“My daughter’s school has a saying on the wall that ‘Life is an unwritten book where you’re the author.’ I definitely take that to heart,” she says. “I am definitely on a different path.”

Do you know someone who uses meth?

UTHealth is seeking males and females between the ages of 18 – 65 for a study evaluating two medications for methamphetamine addiction.

All visits and inquiries are confidential.