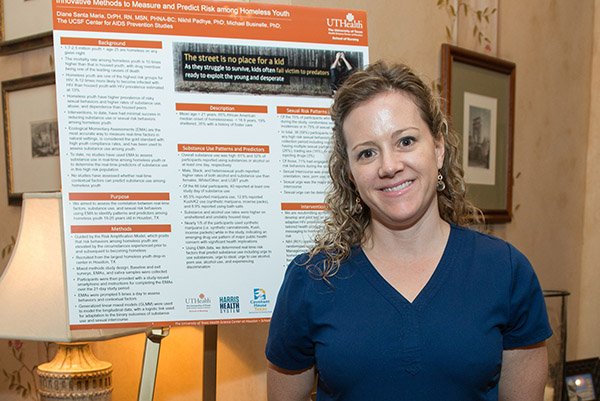 A screening tool designed specifically to assess for human trafficking was more likely to identify sexual and labor exploitation of youth, as well as the risk factors, than a commonly used psychosocial assessment, reported researchers from The University of Texas Health Science Center at Houston (UTHealth) and Baylor College of Medicine.

Participants for the study were recruited from Covenant House Texas, the largest shelter in Houston for homeless youth and young adults. Results were recently published in the International Journal of Environmental Research and Public Health.

“The new assessment tool was much more effective at finding exploitation. It is important for providers working with high-risk groups to add these questions specific to trafficking,” said corresponding author Diane M. Santa Maria, DrPH, RN, dean ad interim and Dorothy T. Nicholson Distinguished Professor at Cizik School of Nursing at UTHealth. “Identifying them allows these youth to access services that they otherwise wouldn’t receive. You can’t help someone you don’t know about.”

“An important part of this project was to have a screening process in place at Covenant House going forward to benefit the residents,” said first author Salina Mostajabian, MD, an adolescent medicine fellow in the Department of Pediatrics at Baylor when the study was conducted. “Having a standard tool will maximize the likelihood of identifying victims and getting them the needed resources.”

Covenant House Texas offers onsite psychiatry and psychology services provided by Baylor and employs a full-time mental health counselor and other mental health and trauma-informed care services to help meet the needs of these youth.

“This study emphasizes the need for health care providers to recognize how difficult it can be for youth who have been trafficked to open up to providers,” said co-author Claire Bocchini, MD, assistant professor of pediatrics at Baylor and faculty member of the Texas Children’s Hospital Center for Child Health Policy and Advocacy. “Providers need to be trained on the importance of using a trafficking-specific screening tool to maximize the opportunity to identify trafficking survivors. We also have to offer the most supportive and accepting atmosphere as possible to help overcome mistrust in the health care system and optimize acceptance of resources.”

Bocchini, who has helped develop curricula on human trafficking for health care providers, and Mostajabian conducted focus groups with youth who completed the screening tool. Those sessions provided insight into the barriers that youth experience in being identified as victims, as well as in accessing services that could help them find safety and treatment. Youth reported mistrust of the system, fear of involving law enforcement, not wanting to interact with the mental health system, and stigma as barriers to disclosure.

“Identifying trafficking victims is a challenging process, due to many factors including extreme trauma and mistrust. This new screening tool will allow health care and social services providers to quickly identify and provide life-changing services to homeless young adults who have been victims of labor and sex trafficking,” said Leslie Bourne, executive director of Covenant House Texas.

Groups identified as most at risk for trafficking include youth involved in the foster care or juvenile justice systems, those who experienced abuse, youth who run away from home, and those who are unstably housed or homeless.

“There is a pipeline from foster care and juvenile justice to homelessness, especially in Houston,” said Santa Maria, who holds the John P. McGovern Distinguished Professorship in Nursing at UTHealth.

The sex trafficking screening tool asked specific questions about trade for sex based on the data, 22 percent reported they had traded sex for food, clothing, money, shelter, favors, or other necessities for survival. Of those, 70 percent were minors (under age 18) the first time they traded sex. Commercial sexual exploitation was more likely to be identified by the new tool than the standard psychosocial assessment.

“We found that the entry into trafficking also happens through family, friends, and acquaintances. This was extremely eye-opening and needs to be explored,” Santa Maria said. “These are kids who have fallen through every crack society has. When these youth are in desperate need of food and shelter, the vulnerability for trafficking is tremendous.”

Sexual history details from medical reports revealed that 19 percent reported more than 10 sexual partners in their lifetime, 29 percent had a prior history of a sexually transmitted infection, 2 percent were HIV-positive, and only 64 percent reported any condom use.

“There’s difficulty in untangling what’s happening. Is it sexual abuse, or sexual abuse and human trafficking? We want providers to be asking the right questions,” Santa Maria said.

The study also uncovered a link between homelessness and mental health issues in youth. According to the results, 53 percent had a recorded psychiatric diagnosis and more than half of those had more than one diagnosis. Half (49 percent) of the psychiatric diagnoses were for depression, over half (59 percent) had a history of psychiatric hospitalization, and more than a third (42 percent) had at least one suicide attempt. More than half of all the participants, 54 percent, had used cannabis or synthetic cannabis; and 17 percent had polysubstance abuse in the past.

Half of the participants in the study had stayed on the streets in the past month; 29 percent had been in treatment centers, shelters, or detention facilities; and 19 percent reported spending most nights in parks, tents, cars, or abandoned buildings.

“These youth are very resilient survivors,” said Santa Maria, whose research has focused heavily on youth and young adults experiencing homelessness. “We want providers to identify young people and then we need a coordinated response to meet their mental health, health care, and social services needs so they can move forward.”

A proposal was submitted to the Texas Legislature for funding that would include a designated in-patient unit, as well as community, school, and home-based intensive outpatient services through the Trauma and Resilience Center in the Department of Psychiatry and Behavioral Sciences at McGovern Medical School. The proposal includes research to provide a best-practices model that could be disseminated to the rest of the state. The interdisciplinary treatment team at the center includes specialists from child psychiatry, adolescent medicine, nursing, psychology, and social work. The Trauma and Resilience Center’s multidisciplinary teams would work in coordination with existing specialized programs that provide case management and advocacy for child sex trafficking survivors.

“Child sex trafficking survivors have often been involved in multiple systems including CPS-affiliated group or foster homes and shelters, and juvenile justice. Often these kids feel like they do not have real options for receiving meaningful treatment. They are just trying to survive and recovery seems completely out of reach,” said Newlin, associate executive director of the Trauma and Resilience Center and chief of child and adolescent services at UTHealth HCPC. “We could meet their most acute needs, get a better handle on the best next step for that child, and with a continuum available, provide a source of constancy and security as they pursue a full recovery from trauma.”

Connie Wiemann, PhD, director of research for the Section of Adolescent Medicine in the Department of Pediatrics at Baylor College of Medicine, also contributed to this project.

Mostajabian was principal investigator on a grant from Texas Pediatric Society Foundation that helped fund the study. She is currently a practicing adolescent medicine physician at a nonprofit adolescent health clinic in Austin.