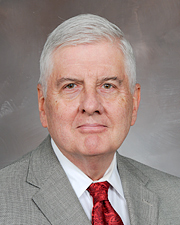 Robert W. Guynn, MD, received his medical degree from Johns Hopkins University of Medicine. After a year of general internal medicine at Case-Western Reserve University/Lakeside Hospital in Cleveland, Ohio, he returned to Baltimore to begin his psychiatric residency at the Henry Phipps Clinic of the Johns Hopkins Hospital. He spent three years as a Clinical Fellow in the U.S. Public Health service, being assigned to the National Institutes of Mental Health. He spent three more years in Washington doing basic biochemical and metabolic research, especially focusing on the determination of the thermodynamics of enzyme catalyzed reactions and metabolic control. Guynn continued these interests after becoming a junior faculty member in the Department of Psychiatry and Behavioral Sciences at the University of Texas Health Science Center at Houston. His subsequent career has been entirely with the University of Texas Health Science Center at Houston. He was Acting Chair and Chair from 1987 to 2007. He was also director of the University of Texas Mental Sciences Institute and the executive director of the UTHealth Harris County Psychiatric Center, a 250 bed psychiatric inpatient hospital.