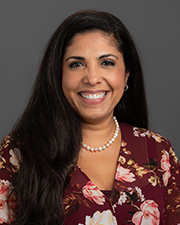 Nubia Lluberes, MD, CCHP, is an assistant professor of psychiatry and director of Competency Restoration at UTHealth Harris County Psychiatric Center (HCPC). She graduated from the Instituto Tecnologico de Santo Domingo School of Medicine in Santo Domingo, Dominican Republic and is a board-certified psychiatrist trained in General Psychiatry at The University of Texas Health Science Center at Houston. She also specialized in Community and Forensic Psychiatry at the University of Pittsburgh, Western Psychiatry Institute and Clinic.

During her residency years, she embarked in many interesting projects including the making of the documentary, “Madly Gifted”, produced by New York artist Gigi Polo. She also received the APA Diversity Leadership Fellowship Award in 2010 and the Byron Wilkenfeld Psychiatric Resident Scholarship Award by the Group Psychotherapy Foundation in 2012. After graduating from her residency program, she worked with underserved populations in northern West Virginia and received the 2016 APA award “For the Advancement of Minority Mental Health.”

Lluberes returned to Texas and served as medical director for Mental Health at the Harris County Sheriff’s Office Jail. In her leadership role, she advocated for changes to improve the care for mentally ill inmates. She is a Certified Correctional Healthcare Provider (CCHP) by the National Commission on Correctional Health Care (NCCHC), with a strong interest in improving the care of mentally ill persons involved in the justice system. She is an active member of the American Medical Association (AMA), American Academy of Psychiatry and the Law (AAPL), American Association of Community Psychiatrist (AACP), American Group Psychotherapy Association (AGPA) among other regional and local professional societies, and a fellow member of the American Psychiatric Association.