Cassie chose UTHealth Houston because of its excellent reputation, case diversity, complexity, and exposure, and the ability to practice in the world-renowned Texas Medical Center. She continues to be proud of her program and its dedication to resident well-being, attendings and staff that have become family through their unending support of the program and its staff, and the ability to deliver medical care to those in most need and in the most dire and complex situations. 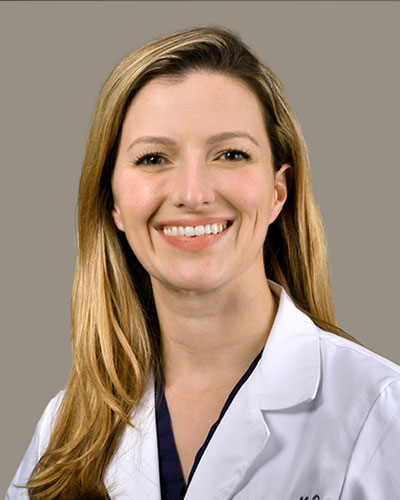 Dr. Cassie Hartline grew up in Houston, very close to the medical center. She went to UT Austin for undergrad and majored in Plan II, worked as a waitress at Pappasito’s Cantina where she is most proud of being awarded the “rising star” as a server there, and spent a year as an assistant researcher at MD Anderson. She completed her medical school at UT Health Science Center at San Antonio, where she was active in the anatomy lab and mentoring program. She went on to general surgery residency at Methodist Dallas Medical Center in Dallas, Texas, and has great memories of the attendings, residents, and operations she got to be a part of there.  She is proud to be a board-certified general surgeon, continuing the tradition of excellence as established at her program by the long line of 100% first pass rate from Methodist Dallas.

Outside of work, Cassie enjoys being with her husband and their three dogs, risking being a patient on the hand service by chainsawing, mowing, and working on her family’s ranch, and catching up with the latest reality TV gossip.