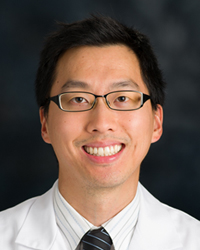 Dr. Jonathan Shum was born in London, Ontario, Canada. He earned a Bachelor of Science Degree from the University of Western Ontario, Canada, in 2001 and a Doctor of Dental Surgery (DDS) degree from the University of Toronto, Canada in 2005. He completed a year-long internship in oral and maxillofacial surgery at Henry Ford Hospital in Detroit in 2006 and transitioned into an integrated OMS residency and medical doctoral program at New York Presbyterian Hospital and Weill Cornell Medical College, where he earned an MD and completed a general surgery internship and OMS residency in 2011. Subsequently, Dr. Shum furthered his training and experience by completing two clinical surgical fellowships in oral, head and neck oncology and microvascular reconstruction at Providence Portland Medical Center, in Portland, Ore. from 2011-2012 and at the University of Maryland Medical Center in Baltimore from 2012-2013. He is certified by the American Board of Oral and Maxillofacial Surgeons and is a Fellow of the American College of Surgeons.

In July 2013, Dr. Shum joined the faculty of The University of Texas Health Science Center at Houston (UTHealth) School of Dentistry with a primary focus on the management of pathology and reconstruction.