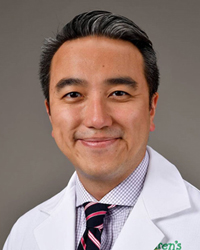 Dr. Phuong D. Nguyen is an Associate Professor of Surgery and serves as Chief of Pediatric Plastic Surgery and Director of Craniofacial Surgery in the Division of Plastic Surgery in the Department of Surgery at McGovern Medical School at the University of Texas Health Science Center at Houston (UTHealth). A native of Minnesota, he graduated Magna Cum Laude with a degree in Neuroscience from the University of Minnesota, where he also subsequently earned his medical degree. He then completed General Surgery training at New York University Medical Center and Bellevue Hospital in New York, NY, serving as the Academic Chief Resident. During this time, he also underwent a two-year post-doctoral research fellowship at the Institute of Reconstructive Plastic Surgery at NYU. Following this, he completed a second residency in Plastic and Reconstructive Surgery at the University of California Los Angeles, and was trained by renowned craniofacial surgeon Henry Kawamoto, DDS, MD. He then completed a fellowship in Pediatric Craniomaxillofacial Surgery at the Hospital for Sick Children in Toronto, Canada. Dr. Nguyen was then recruited to the nationally ranked Children’s Hospital of Philadelphia and the University of Pennsylvania where he served as Director of Facial Motion Disorders and Director of Adult Craniofacial Surgery from 2015-2019. He was recruited to the faculty of UTHealth in 2019 and now also serves as the Associate Program Director for the Plastic Surgery Residency Program. His clinical and research interests include cleft, craniosynostosis, orthognathic surgery, and facial reanimation.

A first generation Vietnamese-American, Dr. Nguyen is also highly active in international outreach and global surgery. He has volunteered on reconstructive medical missions since 2004, and has traveled to Vietnam, India, Honduras, Mexico, Guatemala, Peru, Nepal, and the Philippines amongst others. In particular, he has developed a partnership with Vietnam National Children’s Hospital in Hanoi, Vietnam where he visits annually to develop their craniofacial program and expertise. He has co-founded an NGO, Nuoy Reconstructive International, to help improve platforms for delivery of global surgery and increase transparency and collaboration amongst humanitarian groups in Southeast Asia. He is focused on building a global surgery program at UT and is the faculty advisor for the Global Surgery Student Alliance. Dr. Nguyen is dual board certified by the American Board of Surgery and the American Board of Plastic Surgery.