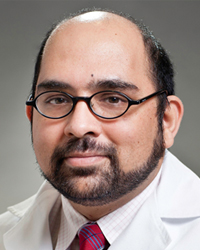 Growing up in the Midwest, Wasim Dar was surrounded by physicians. His father was a pulmonary critical care doctor, and many of his father’s friends were doctors as well. “They seemed to lead interesting lives, so that intrigued me,” Dar says.

Dar chose to pursue a career in transplant surgery because “it was the hardest thing I could have done. To do it well is very demanding. I like that,” he adds.

In his spare time, Dar bikes and writes poetry. He holds undergraduate degrees in Near Eastern Languages and Literature and Biology from Washington University in St. Louis. “I grew up in a household that pushed literacy and literature, and I’m glad for it,” he says.

If he hadn’t become a surgeon, Dar has another dream job in mind. “I would have gone back to Kashmir and been a shepherd. No electricity, no running water. I would just herd sheep all day. A job like that gets to the crux of the human experience. However, my wife and kids enjoy the amenities of our current situation, so that probably won’t happen.”