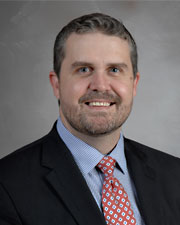 Dr. Kyle Woerner is an Assistant Professor in the Department of Orthopedic Surgery at McGovern Medical School at UTHealth Houston.