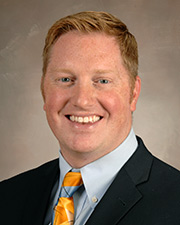 Dr. Geoffrey Konopka is an Assistant Professor in the Department of Orthopedic Surgery at McGovern Medical School at The University of Texas Health Science Center at Houston (UTHealth).

While in medical school Dr Konopka conducted award-winning orthopedic research in the Trauma Training Center, winning first prize at the New York Society for Surgery of the Hand Residents and Fellows Annual Meeting in 2010 and 2011.

Dr. Konopka then performed his internship and residency in Orthopedic Surgery at The University of Texas Health Science Center at Houston (UTHealth). He completed at fellowship in hand and upper extremity surgery at Jackson Memorial Hospital at the University of Miami Medical School.

A published author and medical illustrator, Dr Konopka has published and illustrated research on orthopedic trauma, microsurgery, degenerative arthritis of the hand, pediatric hand surgery, hand tumors, and more. He has presented his research at the local, national, and international level.

Dr. Konopka is interested in providing the best available, research-based medicine to his patients and community.

If you are experiencing symptoms that are urgent or life threatening in nature, please contact your primary care physician, the nearest urgent care facility, or call 911.

Are you a new or existing patient?

For new patients, welcome to UT Physicians and your first visit.

Thank you for choosing UT Physicians again for your care. You can schedule an appointment in the MyUTHealth patient portal.