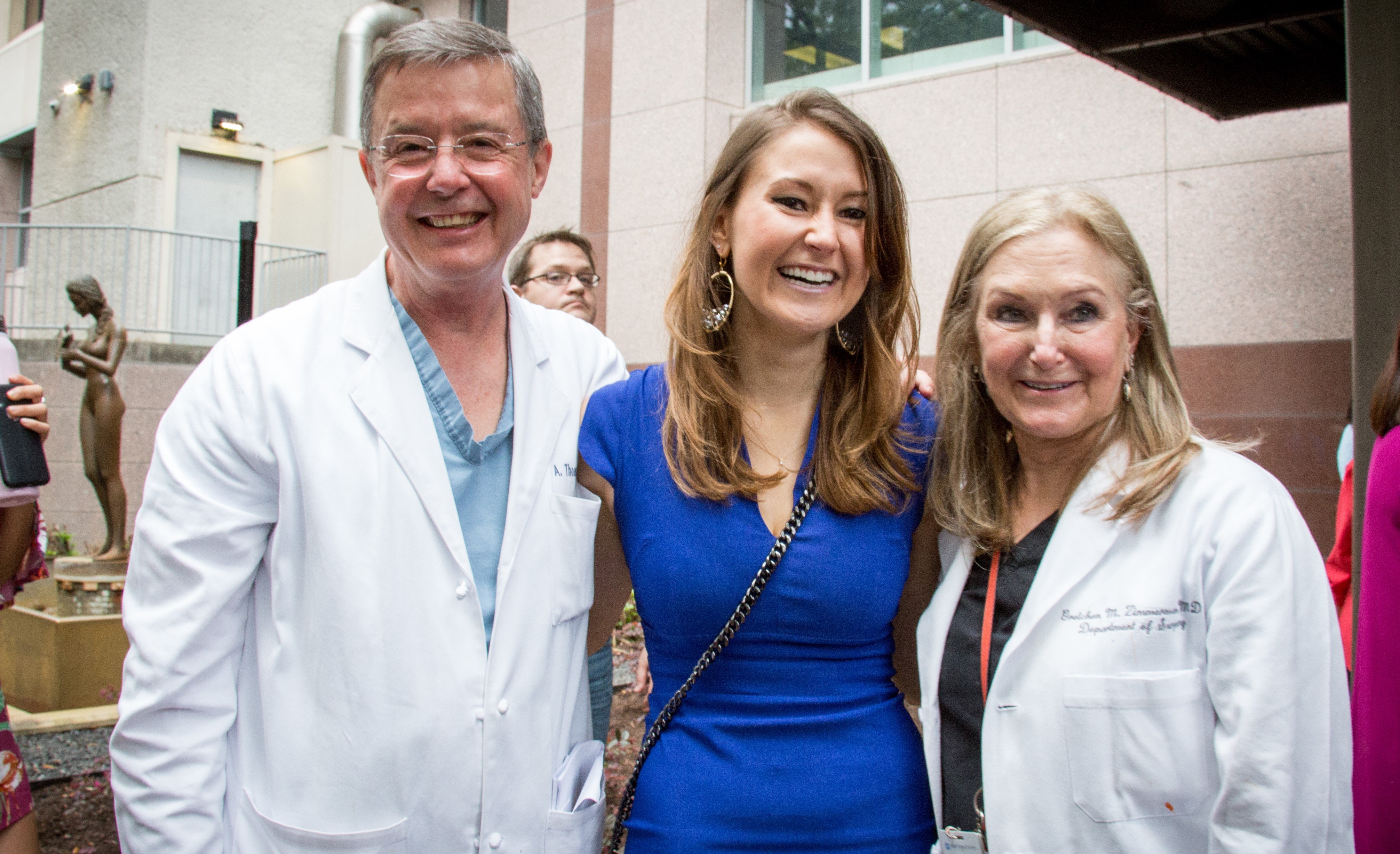 HOUSTON  –  (June 6, 2018) – When budding doctor Rebecca Thompson graduated from McGovern Medical School at The University of Texas Health Science Center at Houston (UTHealth) May 18, she furthered a four-generation-strong family legacy.

The calling came a little later for Rebecca, age 32, who previously pursued a career as an engineer before finally realizing that medicine was in her blood too.

“I was working with implantable devices in a lab that was conducting preclinical trials of a totally artificial heart in cows, which was fascinating,” she said. “But I was much more interested in the body processes than the design mechanicals. I felt better suited to the biology part and more able to contribute.”

Unable to shake off those feelings, Rebecca made the difficult decision to go back to school and start over.

“It was a huge mental hurdle to overcome because all my peers were getting established in their careers and saving up to buy houses, whereas I was going back to being a poor student and giving up my independence, she said. “My parents were incredibly supportive, but they didn’t sugarcoat it – this was a big commitment and I was in for a long, hard grind. Ultimately though, I knew it was what I really wanted so I had to go for it.”

Her brother had just graduated and he was about to start his residency in general surgery while Rebecca was discovering that hitting the books again was proving even harder than she imagined. But she was determined to stick with it and live up to the family name.

“I kept telling myself if my parents and twin made it through, I could too,” she said. “My parents were great at quizzing me ahead of the big exams. They knew exactly what I was going through and enjoyed testing me and each other. Rich was also full of tips and kept telling me to keep going, don’t quit.”

Her hard work and dedication paid off. She will graduate May 18 and embark on a residency in anesthesiology at McGovern Medical School this summer.

“Anesthesiology gives me everything I wanted – doing stuff with my hands, getting immediate feedback and problem-solving. I’m looking forward to being out there doing something useful and standing on my own two feet again,” Rebecca said.

McGovern Medical School holds a particularly special place in the family’s heart because it’s where Zimmerman and David Thompson first met 38 years ago while they were general surgery residents. Zimmerman recalls being one of the few women in class, but there was never any doubt in her mind that she belonged. 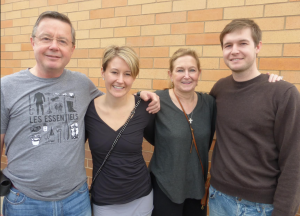 Rebecca with her parents and twin brother Richard.

“I was very proud of my father, uncle and grandfather, so I always wanted to be a doctor. My father Richard was a general surgeon, who served in the army and went to New Guinea,” Zimmerman said. Her paternal grandfather Henry Sr. was a family practitioner and her uncle Henry Jr. was a distinguished cardiologist who pioneered procedures to check the heart’s pumping function. The family history could have been even stronger, had Zimmerman’s mother Jesselyn, who was brought up in Oklahoma, fulfilled her dream.

“My mother worshipped her father, who was a judge. But for some reason she chose medicine, which was highly unusual back then in the ’40s. Against all the odds she made it to medical school, where I believe she was the only female student. She loved all the learning,” Zimmerman said. “There she met my father, who was 15 years her senior. They fell in love and she left after the first year to start a family. I think later on she always regretted not finishing, but times were different then.”

Zimmerman’s commitment to graduate and make surgery a vocation was only strengthened by her wish to finish the journey her mother cut short.

“Of course there were stressful days and emotional ones, when you ran to the bathroom and cried. But at the end of it you could always say you were trying to make the world a better place,” she said.

Zimmerman and David Thompson both completed their residencies in general surgery at McGovern Medical School. She has spent the last 38 years in the operating room, as well as instructing other budding surgeons at the school. Thompson went on to complete a fellowship in colorectal surgery. He now practices with UT Physicians, the clinical practice of McGovern Medical School.

“A lot has changed over the years, but some things are constant,” Zimmerman said. “People are still driven by the desire to do good and make a difference and McGovern Medical School remains among the very best places to learn and flourish.”

With the family tradition in good shape for the future and a combined service of 83 years with McGovern Medical School under their belts, Gretchen and David will soon be hanging up their scrubs for good. They plan to retire this summer, freeing up more time to indulge their other passions – skiing, kayaking and hiking to name a few.

Zimmerman was emotional as she reflected on the impressive family history.

“We couldn’t have better kids – they are the best thing that ever happened to us. There was never any pressure for them to follow. We just wanted them to get a job which gave them satisfaction,” she said. “Of course we’re so pleased and proud that they both have – I guess medicine is a genetic disorder! It’s quite a legacy we’ve got going on and it’s over to them now.”