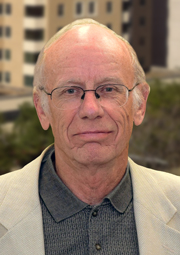 The research programs in my laboratory are concerned with learning and memory processes of animals and humans. Visual list memory is being tested in monkeys, pigeons, and humans in nearly identical tasks. Currently we are focused on exploring processes of (retrieval) inhibition that are responsible for memory changes that occur during retention (see figure). Strong recency effects in visual memory give way to strong primacy effects as the retention delay is lengthened. We are also looking at proactive interference effects of previously seen items on memory later in testing sessions. We know the locus of these proactive interference effects and have been able to measure the interference function showing its effects back in time.  These results relate to familiarity memory as opposed to episodic memory.

The change-detection memory task is being used to compare capacities of visual working memory in pigeons, monkeys and humans. We’ve devised tasks to explore object and location memory which are the ‘what’ and ‘where’ components of episodic memory.  We are extending these memory studies to patient populations (TBI, PTSD), patients undergoing brain surgery, and fMRI scanning to complement the behavioral memory studies.