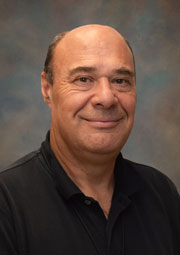 The long-term goal of our research is a description of neural circuits in the primate retina at the level of synapses between identified populations of neurons, a retinal connectome.  We are now collaborating with the Neitz Laboratory at the University of Washington on a study of the neural circuits that process information from blue cones in the macaque retina.  They have imaged serial sections of the central macaque retina using serial block-face scanning electron microscopy, and we are working with them to reconstruct the individual neurons and describe their synapses.  We are beginning in the outer plexiform layer, where the rods and cones interact with horizontal cells, inhibitory local circuit neurons.  The rods and cones also provide input to bipolar cells, which convey signals to the inner retina, where their targets include retinal ganglion cells, the projection neurons of the retina.

The focus of this study is on the central retina, where midget bipolar cells and their targets, midget ganglion cells, receive input from a single cone.   The midget ganglion cells are generally thought to mediate the perception of red and green because they receive excitatory input from a single red or green cone and inhibitory input from the surrounding cones.  However, this idea was called into question by a recent psychophysical study.  Using adaptive optics, it was possible to simulate a single red or green cone at a time in human subjects.  This generally did not give rise to the perception of color; most cones yielded a sensation of white.  Only a few cones seemed to generate color sensations.  Our working hypothesis is that one type of horizontal cell, called H2, conveys information from the blue cones to a subset of midget bipolar cells that, in turn, provide excitatory input to a subset of midget ganglion cells that give rise to the sensation of color.  We have seen synapses in the neuropil of the outer plexiform layer, and we are now reconstructing the pre- and post-synaptic neurons to test this hypothesis.  We will also analyze the synaptic output of two types of bipolar cells that selectively contact blue cones.  We are particularly interested in their connections with amacrine cells, inhibitory neurons of the inner retina.  Our working hypothesis is that these amacrine cells also contribute to the perception of color.

Amacrine cells containing vGluT3 (black) are expected to interact with both types of cholinergic amacrine cells (blue) and to receive excitatory input from both ON (5) and OFF (7) bipolar cells (green) . They are also expected to provide inhibitory input to both ON and OFF parasol cells (6, 8).