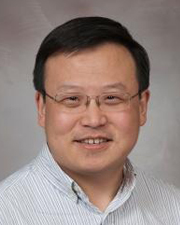 The research of my laboratory focuses on structural characterization of integral membrane proteins. Membrane proteins are fundamentally important in for nearly all aspects of biological activity.  These molecules control material and information communications across the cell membranes.  However, their working mechanisms are less understood largely due to the notorious difficulties to study them structurally. We are currently focusing on two important membrane protein systems involved in Ca2+ homeostasis and phospholipid metabolism.  We aim to understand structure, function and regulation of these membrane proteins by using a combination of biochemical and biophysical approaches, primarily X-ray crystallography.

Calcium ion, the most abundant cation in the human body, serves as a universal secondary messenger to modulate a broad array of biological processes. CaCA proteins constitute a large membrane protein family, existing in all kingdoms of life. CaCAs  promote Ca2+ extrusion out of cells by utilizing an electrochemical gradient of other cations such as H+ or Na+, playing an important role in Ca2+ homeostasis. The most studied CaCA proteins are Na+/Ca2+ exchangers (NCXs), which are critical in maintaining cardiac contractibility in hearts and in facilitating neuronal transmission in brains.  NCX proteins have a conserved structural motif, in which 10 predicted transmembrane helices forming a Na+/Ca2+ exchange pathway and one large intracellular domain between TMs 5 and 6 regulating ion exchange based on the needs of intracellular Ca2+ signaling. Our current effort is to help understand two mechanisms of NCXs and CaCAs: i) The Ca2+ transport mechanism – What is the structural basis of Ca2+ ion selectivity and how do these proteins catalyze Ca2+exchange across the membrane bilayer using diverse cation driving forces? ii) The Ca2+, Na+ regulatory mechanism – How do the regulatory domain controls NCX activity to facilitate rapid cellular Ca2+ homeostasis? Our  structural investigations help understand the role of these important proteins in calcium signaling processes.

Phospholipid metabolism is fundamental in cells. It not only generates basic biological membranes, but also plays important roles in cellular signaling processes in nearly all tissues. In addition, many proteins, both globular and membrane bound, require specific phospholipids to fulfill their functions. Cells maintain a complicated and regulated metabolic network to synthesize a great diversity of phospholipids and degrade them in a time fashion to meet cellular requirements. Many steps of phospholipid metabolism take place on the cell membrane and are catalyzed by membrane-embedded enzymes. Their molecular mechanisms are poorly understood largely due to the paucity of structural information.  In particular, how these enzymes select their substrates from the lipid membrane bilayer and carry out catalysis in a hydrophobic membrane environment is a central question still unanswered for general phospholipid metabolic mechanisms. Our ongoing project is expected to gain structural information to address this question. 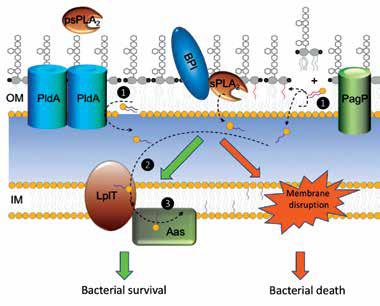