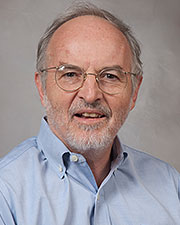 Autoimmune Hypertension: The Role of Receptor-Activating Autoantibodies in Disease

Numerous forms of hypertension have an underlying autoimmune component associated with elevated levels of inflammatory cytokines and the presence of autoantibodies capable of activating the major angiotensin II receptor, AT1R (Xia and Kellems 2013). Although these autoantibodies were originally observed in women with preeclampsia (a serious hypertensive disease of pregnancy), they have now been observed in numerous other hypertensive conditions, including malignant hypertension, refractory hypertension and aldosteronism. I have collaborated extensively with Dr. Yang Xia to understand the pathological consequences of these autoantibodies. We were the first to report that these autoantibodies, termed AT1 AA, cause features of preeclampsia when introduced into pregnant mice. Evidence that AT1-AAs contribute to hypertension in experimental animals is now extensive and compelling. A fascinating feature of these autoantibodies is that they uniformly recognize the same epitope (AFHYESQ) located on the second extracellular loop of AT1Rs. In view of the wide-ranging pathophysiological consequences of these autoantibodies, it is important to understand the molecular mechanisms and immunological conditions that initiate their production. This goal is best achieved with an animal model in which the production of these autoantibodies can be experimentally induced with convenience and reproducibility. We have recently developed a mouse model of cytokine-induced hypertension that fulfills these criteria. Our research has revealed that tissue transglutaminase (TG2), a widely distributed enzyme that modifies glutamine residues of proteins, to be required for AT1-AA production and cytokine-induced hypertension. These are important and novel findings that form the basis of our hypothesis that many forms of hypertension result from an autoimmune condition in which cytokine-mediated induction of TG2 results in the post translational modification of AT1Rs, leading to the creation of a neoantigen that stimulates autoimmune production of AT1-AAs. The results of our research are expected to identify therapeutic peptides that will block the hypertensive actions of AT1-AA. Additional research is expected to highlight the use of TGase inhibitors to block the cytokine-induced production of AT1-AA and reduce hypertension. 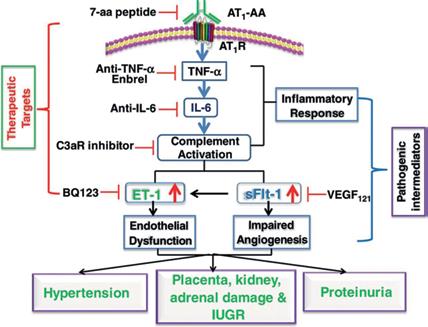