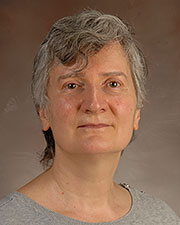 My current research is focused on characterization of mechanisms of channelrhodopsin function in vitro and in vivo. Channelrhodopsins (ChRs) are a subfamily of microbial rhodopsins that serve as receptors for phototaxis in green flagellate algae, such as the model organism Chlamydomonas. When expressed in heterologous animal cells, they act as unique light-gated cation channels and are therefore widely used to control the membrane potential and cytoplasmic cation concentrations (optogenetics). But, despite rapidly growing interest in ChRs as optogenetic and even gene therapy tools, many aspects of their function remain poorly understood. In collaboration with other lab members I have cloned several new ChRs from different algal species and carried out comparative analysis of their channel activity by patch clamp recording in HEK293 cells and cultured hippocampal neurons to identify essential structure-function relationships and evaluate the potential of these ChRs for optogenetic applications. Using pulsed laser excitation we are also able to detect intramolecular proton transfers by ChRs and to probe their role in channel gating. In native algal cells depolarization of the plasma membrane by ChRs is greatly enhanced by activation of yet unidentified Ca2+ channels. My goal is to characterize these channels electrophysiologically by recording ChR-mediated photocurrents from intact algal cells, and to identify them at the molecular level by transcriptome analysis and RNAi interference.