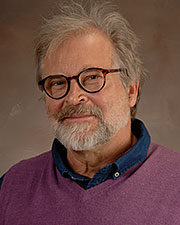 Folding and Assembly of Membrane Proteins

Do Membranes Tell Proteins How to Fold?

Biological membranes manifest a myriad of unique phospholipid molecules and an amazing diverse array of surfaces and forces (electrostatic, elastic, hydrophobic, electrophoretic) that can fold and orient an integral membrane protein. By taking advantage of the simple yet well-characterized Escherichia coli bacterial system, we can easily manipulate either temporally or in a dose-dependent manner the lipid composition in genetically altered strains, lipid-based solid supports, mixed lipid-detergent micelles, or lipid bilayers of liposomes. These systems coupled with in vitro membrane protein refolding, reconstitution techniques and membrane protein topology assays are being used to establish the function of individual lipids in such complex processes as insertion of proteins in to the lipid bilayer and folding and topogenesis of membrane proteins. Given the similarity between in vivo and in vivo results, the rules governing lipid-protein interactions are easily extrapolated to folding and assembly rules that are applicable to more complex biological systems.

Traditionally, molecular chaperones have been classified as proteins that bind transiently to substrate proteins to promote their proper folding by interacting non-covalently and transiently with non-native folding intermediates and not with either the native or totally unfolded protein. We developed novel techniques (Eastern-Western blotting technique, coupled cell-free protein and phospholipid biosynthesis systems, advanced substituted-cysteine accessibility method as applied to transmembrane domains (SCAMTM)) to analyze the effects of lipids on membrane structure and function. Using these techniques coupled with genetic manipulation of E. coli “lipid” genes led us to discover a novel function for membrane phospholipids acting as molecular chaperones for (lipochaperones) and topological determinants of membrane proteins during initial insertion and folding or after complete folding into a native structure. Eastern-Western blotting was invented as the first technique, which allowed the identification of transient effects of lipids on membrane protein conformation. 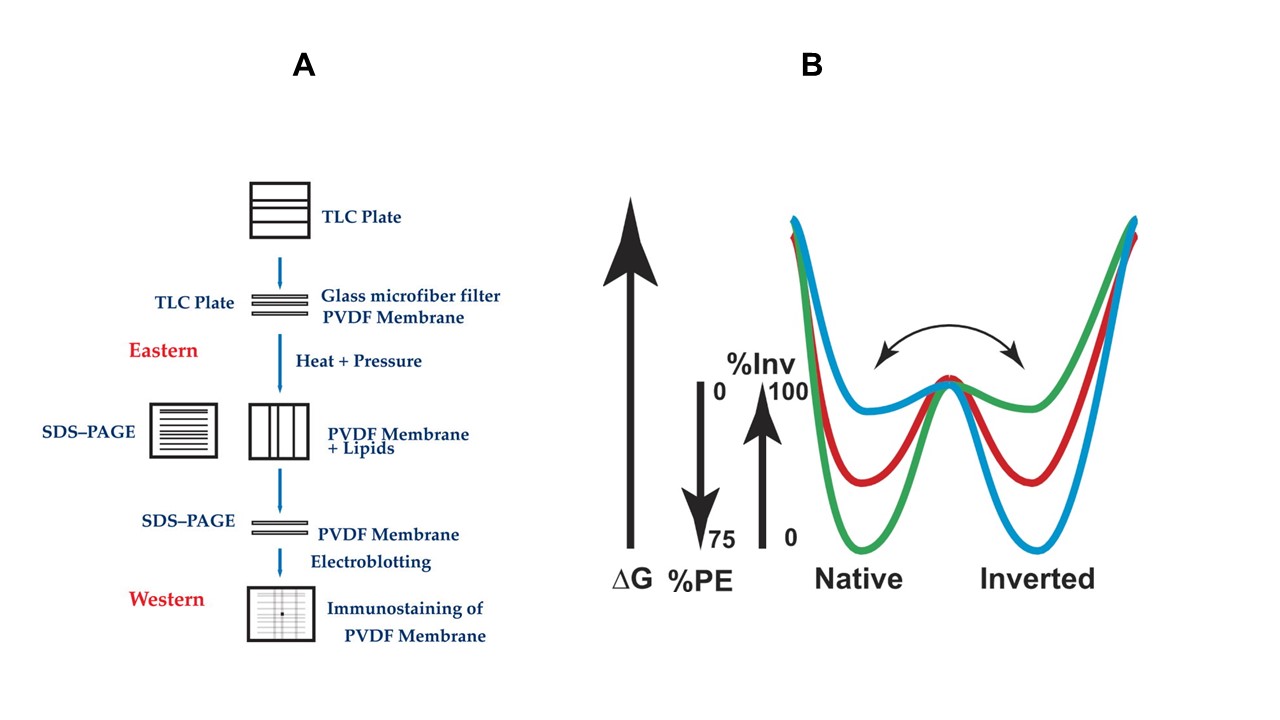 Experimental questions we focus on

Studying membrane protein topogenesis focuses on understanding and predicting how a given protein sequence will fold and orient itself in a given phospholipid environment.

Reagent strains of Escherichia coli cells in which a particular lipid can be either eliminated, substituted by “foreign lipids”, or its level controlled temporally during membrane protein synthesis were developed to assess how membrane lipid composition affects protein topogenesis. Advanced methods for determining protein topology (in particular substituted monocysteine accessibility method (SCAMTM) were developed to analyze protein transmembrane topological organization as a function of the lipid environment in whole cells, inside out and right side out membrane vesicles and liposomes. We have used the well-characterized lactose permease (LacY) and several other secondary transporters of E. coli to establish the role of the major phospholipid (phosphatidylethanolamine, PE) in determining membrane protein topological organization. We established for the first time that membrane lipid composition is a topology determinant of a polytopic membrane protein at the time of initial membrane insertion and assembly. Furthermore, protein topological organization can change and is responsive to changes in the lipid environment after initial folding. These results clearly demonstrated that the lipid composition is a determinant of transmembrane domain orientation and challenges the dogma that once a transmembrane domain is membrane inserted and oriented during assembly it is static and not subject to change. Common dogma dictates a high thermodynamic barrier to transmembrane domain flipping after insertion and predicts that flip-flop of integral proteins does not occur. However post-translational and even post-insertional reorientation of membrane proteins is not unprecedented. Such flip-flopping proteins are synthesized in one direction and then flipped following synthesis of the remainder of the protein or even after the insertion is fully completed. Lipid-protein interactions (particularly net charge neutral phospholipids such as PE) appear to affect the potency of charged residues as topological signals and therefore drive membrane protein topogenesis according Positive-Inside Rule by damping the translocation potential of negative residues in favor of the cytoplasmic retention potential of positive residues (Charge-Balance Rule). 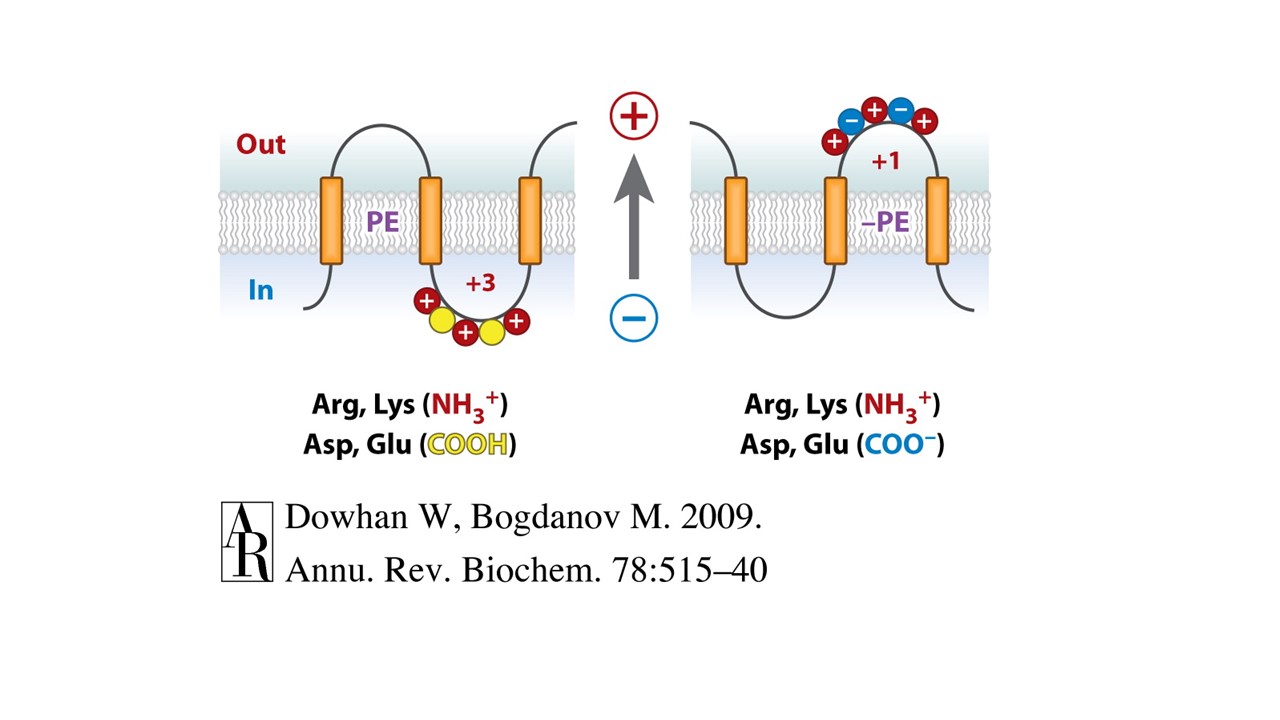 Experimental questions we focus on

Role of Gram-negative bacterial envelope remodeling in the development of resistance to antibiotics, intracellular survival and ability to resist innate immunity of the host

The goal of my third current project is to test a hypothesis that conformation of outer membrane b-barrel porins from pathogenic bacteria may adapt to in vivo changes in phospholipid composition in order to optimize or modulate their activity or folding and assembly pathway. The goal of this project is to test a hypothesis that specific lipids (cold and shock lipids in this case) can optimize protein function and conformation and promote proper folding at low or elevated temperatures i.e. act in the way molecular chaperones of protein origin do. Specifically, we are addressing the question whether these adaptive changes are important not only for poring-mediated antibiotic permeability but also for the development of bacterial virulence and resistance to antibiotics and innate immune system of infected host and thus could be utilized to increase drug susceptibility of pathogenic microorganisms to known antibiotics and innate immune system.