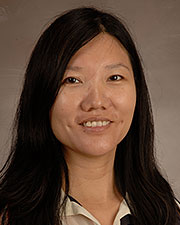 Dr. Weng received her Bachelor’s degree in Cell and Molecular Biology from University of Science and Technology of China (China) in 2003. In 2009, she received her PhD in Physiological Sciences at Oklahoma State University studying molecular mechanisms of fetal lung development, where she was awarded the Heartland Pre-doctoral Fellowship from the American Heart Association. In 2010, she joined the University of Texas Health Science Center at Houston as a Postdoctoral Fellow and continued her lung research, where she was funded by the American Heart Association for studies on the role of hypoxia-induced deoxycytidine kinase (DCK) in chronic lung diseases.

Dr. Weng’s research interest is in the field of lung biology and pathology, including fetal lung diseases, acute lung injury and chronic lung diseases. Using cDNA and microRNA microarrays, she has established a platform for screening pathways and therapeutic targets for chronic lung diseases. She has also demonstrated a novel role of hypoxia-induced DCK in chronic airway enlargement and pulmonary fibrosis. In addition, she has studied the protective role of adenosine signaling in acute lung injury, especially in barrier function maintenance. Currently she is characterizing Cleavage factor 25 (CFIm25), a factor regulating RNA polyadenylation, in idiopathic pulmonary fibrosis; she is using RNA-sequencing to identify targets of CFIm25, particularly those involved in pulmonary fibrosis.

Dr. Weng has been the recipient of several awards, including student seed awards, the Graduate Research Excellence award from Oklahoma State University, and the Cell & Molecular Physiology Society Graduate Student award from the Committee of the Cell and Molecular Section of the American Physiological Society.