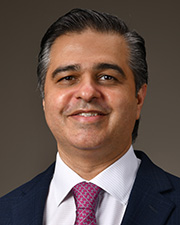 Dr. Keyhani has extensive experience in arterial and vein related disorders, as well as complete training in ultrasound guidance.  He is (RPVI) Registered Physicians in Vascular Interpretation certified which is critical in diagnosing underlying venous diseases that may not be evident in clinical examinations.

He completed his doctorate of osteopathic medicine at the University of North Texas Health Science Center, followed by a residency training in general surgery at UTHealth, here in Houston.  He then moved to Los Angeles and completed a vascular surgery residency training at the University of California Los Angeles through the leadership of Dr. Rodney White, pioneer of Endovascular Surgery.