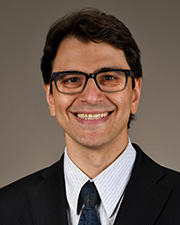 Dr. Ramzy is also a highly respected for his leadership in transcatheter approaches by his accomplishments in the field of TAVR and TMVR. Dr. Ramzy is also widely recognized for his leadership in mechanical circulatory support, with broad experience in the implementation of extracorporeal membrane oxygenation; left ventricular arterial support including Impella; and the total artificial heart.

Dr. Ramzy’s leadership in the development of new devices has led him to become an innovator in education, as well. Dr. Ramzy’s innovations in minimally invasive, robotic, and transplantation methodologies has led to over 100 peer-reviewed publications and over 200 abstracts. Widely regarded for his editorial activity, Dr. Ramzy was named Reviewer of the Year for 2020 by the Annals of Thoracic Surgery in the field of adult cardiac surgery. He also serves as an editorial board member for The Journal of Thoracic and Cardiovascular Surgery.

Dr. Ramzy seeks to join with his distinguished colleagues in assuming the mantle of cardiac surgical leadership that originated in Houston, and to become a leading voice in the next generation of cardiac surgical interventions through his advocacy of minimally invasive, robotic, mechanical support devices and transplantation. As a leader in the Houston community, Dr. Ramzy’s goal is to make the McGovern School of Medicine a leading center in the proliferation and normalization of minimally invasive and robotic surgeries.

Dr. Ramzy has devoted his career clinically, within research, and in teaching, to the proposition that the advantages of minimally invasive and robotic procedures offer less discomfort and faster recovery times for patients; greater efficiency for both providers and patients; and a higher standard of care for the next generation of patients and physicians alike. By joining the historic important University of Texas Houston medical community, Dr. Ramzy looks forward to working with his colleagues to have a transformative effect in advancing the latest minimally invasive and robotic methodologies for Houston and the entire state of Texas and beyond.