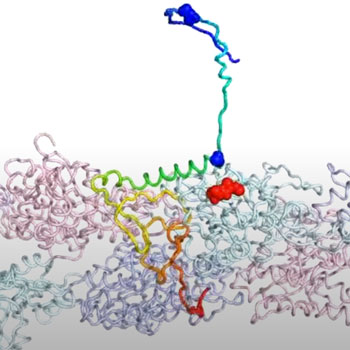 Scientists at Rice University and the University of Texas Health Science Center at Houston (UTHealth) uncovered new clues in the protein CPEB3 as part of their dogged pursuit of the mechanism that allows humans to have long-term memories.

The study by Rice theoretical biophysicist Peter Wolynes and Neal Waxham, a neurobiologist at UTHealth’s McGovern Medical School, provides insight into a positive feedback loop between forming the actin backbones that give dendritic spines their shape and flexibility and the actin-binding domains in CPEB3, a functional prion that binds RNA which also forms long-lived aggregates that may indeed store the stuff that memories are made of.

The models show that when attracted to actin, CPEB3 transitions from a coiled coil of helices into a beta sheet structure that “zips” into a hairpin configuration that allows it to aggregate with other CPEB3 proteins.

Upon aggregation, CPEB3 appears to translate its target messenger RNAs, which include actin mRNA that strengthens the synaptic junctions essential to memory, completing the positive loop.

“This is a more ambitious project than the actin-CaM kinase study, where we also simulated a really huge actin system with a really huge protein,” Wolynes said.  In that study, published a year ago, CTBP researchers modeled how a central protein (CaMKII) holds parallel actin filaments together, a state that could be visualized in an electron microscope by Waxham’s lab.