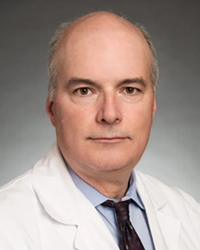 Growing up in Knoxville, Tennessee, where his father was the head of non-nuclear construction for the Tennessee Valley Authority (TVA), Steve Bynon dreamed of becoming an astronaut.

Instead, his father enrolled him in the pre-med program at the University of Tennessee. “I had no choice, but it was something I wanted as well. I had seen a show on PBS about Red Duke and the first Life Flight and decided I wanted to be that guy – he was so larger than life!” As fate would have it, Red Duke would be one of his colleagues at UTHealth.

In his spare time, Bynon, who coached swimming throughout college, is an avid cyclist who has completed the MS-150 ride from Houston to Austin.

Bynon enjoys surgery because it’s such a rewarding career. “When a patient thanks you for saving their life – you’ll never get that anywhere else. It means more than money, fame, awards, anything. I love my job today as much as the very first day I started.”