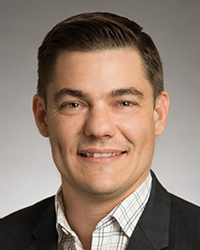 Brad Snyder balances tradition and innovation in his life and practice. The New Orleans born and raised surgeon is married to his high school sweetheart. They met freshman year and were at brother and sister schools.

Snyder’s main interest is minimally invasive surgery and robotics. “I’m a technology junkie. If there’s something new out there, I want to use it. My mission in life is to prove robotics works,” he says. “And we train more robotics surgeons than any other hospital. “

Over time, Snyder believes surgeons will make fewer and smaller incisions to get procedures done quickly and well.

Away from the operating table, Snyder has been into Brazilian Jiu Jitsu for the past few years, winning several medals and awards. He also plays the piano. You can see videos of both on YouTube (check out a first-round submission via armbar!).

He and his wife have five children, who also occupy a lot of his spare time.

His philosophy? “Until you put your hands on people, you don’t know compassion. I really like doing what I do.”