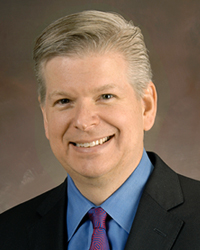 Dr. Erik Wilson was born in the West Texas town of Andrews. He completed his undergraduate work at Texas A&M University, attended medical school at Baylor University and residency at Scott & White Memorial Hospital in Temple, Texas. “I got into laparoscopy and was told I could probably teach it,” he says. That prediction came true.

“I got into laparoscopy and was told I could probably teach it,” he says. That prediction came true.

Dr. Wilson did almost 1,600 surgical procedures during his years of residency. But during the one year of his fellowship, he did 1,200. Today, he is a full-fledged academic surgeon: and director of one of the largest minimally invasive surgical fellowships in the country, training six to eight fellows a year. He is the Executive Medical Director of the Surgical Innovation and Robotic Institute (SIRI), a joint venture training facility between Memorial Hermann Health System and UTHealth; dedicated to developing and teaching new surgical skills with new technology.

Dr. Wilson is Co-Founder of the Texas Association for Bariatric Surgery and Houston Bariatric Society. He is a Founder and a past President of the Clinical Robotic Surgery Association. Dr. Wilson is a leader in endolumenal and robotic general surgery since 2002 with over 3,000 cases performed robotically. He specializes in weight loss surgery, reflux surgery, hernias and minimally invasive general surgery. “I am involved in the development, training, and FDA approval process of new devices and procedures,” he explains. Dr. Erik Wilson is also the founder for the annual Surgical Disruptive Technology Summit, held in Houston. This is a three-day conference uniquely planned that provides industry and surgeons an open dialogue about the future of surgery and surgical practices.

“Robotics is an immersive process, very precise. I’ve been doing it over 15 years. UTHealth McGovern is a leader in robotic bariatric surgery procedures and others, like hernia, anti-reflux and bladder augmentations.”

Dr. Wilson has three boys, likes to ski, read and travel. He also engages in a lot of professional development.