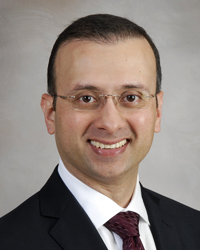 The son of an internist, Nadeem Dhanani grew up in Hollywood, FL, and went to college at Duke, where he majored in Biology, Public Policy and Health Policy.

While in college, he worked in the Clinton White House as a healthcare liaison.  “One of the things that struck me the most about the healthcare reform process was the tremendous need for medical professionals to voice their opinions and play a leadership role in shaping healthcare policy. We owe it to our patients to get involved,” he says.

After medical school, Nadeem spent time in Kenya and Tanzania in East Africa doing work on primary healthcare initiatives through the Aga Khan Health Services. His family is from Tanzania, via India several generations prior.

Nadeem and his wife, Nadya, an Anesthesiologist specializing in Pain Management, had a baby girl 6 weeks before moving back to Houston in 2013. For fun, he likes sports and the outdoors, and plays tennis and guitar. “I learned the guitar to surprise my wife at our wedding by playing a Keith Urban song that she loves. She was definitely surprised!”

Dr. Dhanani has a bit of a dramatic flair as well. Growing up in South Florida, he routinely appeared on the evening news as a Youth Reporter for ABC. He maintained his interest in the performing arts through high school and college, where he actually started out as a Drama major. “If I hadn’t become a surgeon, I would have probably been a journalist, or a lawyer, or in public service in some administrative capacity, involved in health policy.”