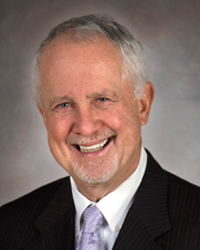 Department head and golf enthusiast Richard Andrassy grew up on East Coast, and family still lives in Florida. Here in Houston, he and his wife have six grandchildren to entertain.

“I wanted to be a doctor since I was seven years old,” he says. It was confirmed when he had his appendix out at 17.

Andrassy has been head of the department since 1994; he is the longest-serving surgical department chair in the United States. He is also the only pediatric and general surgeon in Texas who counts both adults and children as his patients.

A baseball player in college, Andrassy started playing golf at age 44, and was lucky enough to get to play with Greg Norman, Arnold Palmer and Jack Nicklaus. “That motivated me to play better!” he says. It also meant he’s been taking care of pro golfers for decades.

In his spare time, he reads Early American history and novels for relaxation. “We have a huge library at our house, and my wife is a plastic surgeon who is getting her MFA at the Glassell School at the Museum of Fine Arts, Houston.”

Advice? “Enjoy each day of your training and practicing. The journey is a lot more fun than being a department chair or having a big office.”