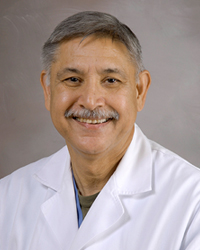 Growing up in Pakistan and England, Saleem Khan wanted to be a merchant marine and see the world, but his father said no to that idea. Even though his father was a surgeon, he also discouraged Khan from being a doctor. “He wanted me to be a teacher,” he says. If he were not a surgeon today, Khan admits he’d like to be an English teacher after all, as he has a love of reading.

Khan came to the US when he was 22, and enlisted in the military in 1987 to give back to this country. Between 2003 and 2009, he had seven deployments in Iraq and Afghanistan. He was also in Operation Desert Storm. Khan has been awarded the Bronze Star and Legion of Merit, combat decorations for his performance on battlefields. “Knowing that I stood up and did my duty is the most fulfilling part of my service,” he adds

What keeps him going? “As I get older, coming into work is fun. Just the idea that you can still do it means you don’t take it for granted that you’ll be doing this forever. It’s a beautiful, fulfilling career,” he says.