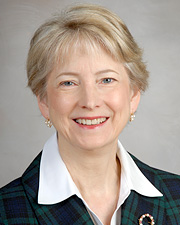 Dr. Dougherty graduated Phi Beta Kappa from the University of North Carolina with highest honors in 1973. She received her medical degree and completed her residency training at The University of Texas Medical Branch in Galveston, from 1978–1981. She completed her cardiology and electrophysiology fellowship training at the McGovern Medical School at UTHealth, following which she joined the faculty and was promoted to professor of cardiology in 2001. Dr. Dougherty is the recipient of many honors and awards, including Top Doctor by US News and World Report in 2011, Outstanding Achievement in Clinical Service at UTHealth in 1996, 1997 YWCA Outstanding Women of Achievement—Medicine, Science and Technology Award, and American Heart Association’s Paul Dudley White Award 1997-1998. She is past president of both the Houston Cardiology Society and the Houston Electrophysiology Society

Long an advocate of responsible clinical research and the rights and welfare of human research participants, Dr. Dougherty has also promoted the appropriate representation of women in clinical research trials. She has been the Executive Chair of the Committee for the Protection of Human Subjects since 2004. In 2011, she assumed the role of Institutional Official and Vice President of the Human Research Protection Programs.

Her clinical interests include electrophysiology, pacing, defibrillation and ablation of cardiac arrhythmias.