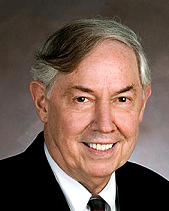 Frank C. Arnett received his MD from the University of Cincinnati, and did his residency in Internal Medicine and his fellowship in Rheumatology at the Johns Hopkins University School of Medicine, where he served on the faculty until coming to UTHealth as Director of the Division of Rheumatology (1984-2002) and Chairman of the Department of Internal Medicine (2000-2004) and was the first Director of the Center for Clinical and Translational Sciences (2006-2008). Dr. Arnett’s research focus has been on the genetic basis of the rheumatic diseases, especially scleroderma as well as lupus and polymyositis, and he was the Director of Specialized Center of Research in Scleroderma (1998-2006) and the Center of Research Translation in Scleroderma (2006-2010). He has numerous awards and distinctions, including being the President of Alpha Omega Alpha National Honor Society (1998), a Member of the American Academy of Physicians (AAP), Master of the American College of Rheumatology and Master of the American College of Physicians and has received the TIAA-CREF Distinguished Medical Educator Award. He is also the recipient of UTHealth President’s Scholar Awards for Excellence Teaching (2006) and for Research (2009).