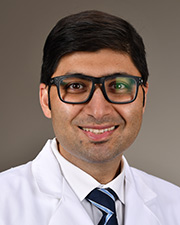 Gautam Sikka is an Assistant Professor in medicine at McGovern Medical School at UTHealth Houston and has completed his training in fields of Internal Medicine, Critical-care Medicine, and Pulmonary Medicine. While perusing Pulmonary and Intensive care training at Johns Hopkins Medicine in Baltimore-Maryland, he spent additional time learning about pathophysiology of sarcoidosis and applied his training in patient care at the Johns Hopkins sarcoidosis clinics.

After completing training, he joined as faculty at the Department of Pulmonary, Critical Care and Sleep medicine at University of Texas Health Science Center at Houston with a focus to be part of the Clinics of Sarcoidosis and build a multi-disciplinary team around the patients who live with sarcoidosis.

Dr. Sikka’s research interests include, studying pulmonary diseases, especially the role of opsin biology in pulmonary vascular diseases, such as pulmonary hypertension (PH), a disease with unacceptably high mortality and morbidity. PH which is seen in some patients with sarcoidosis, is characterized by impaired pulmonary vascular dilation and dysregulation of cell death and turnover, leading to extreme vascular remodeling. His research and clinical interests are aligned, allowing him to bring questions that arise in the clinic or hospital, back to the bench. Having serendipitously discovered photoreceptors in blood vessels, he studied these novel physiologic pathways and their relevance in health and disease. In the last few years, his focus on these pathways helped identify the photoreceptor subtypes (opsins) expressed in pulmonary arteries and elucidate that these opsins mediate wavelength-specific (blue light), light- dependent vascular responses

Dr. Sikka studied leptin signaling in small vessel regulation and its role in maintaining normal vascular compliance. Using in vivo and ex vivo experiments, we demonstrated that leptin plays a vital role in preserving normal vascular compliance, independent of its effects on body mass and that it reverses Hyperlipidemia and Vascular Dysfunction in mice exposed to intermittent hypoxia.

Along with Asif Mustafa, Dan Berkowitz and Solomon Snyder, he evaluated the properties of endogenous hydrogen sulfide as an endothelial-derived hyperpolarization factor, which mediates its effects via a novel, redox-sensitive, post- translational modification called sulfhydration. This work has been well cited by others (~500 citations). During this time, He developed charge dye imaging protocols to estimate changes in membrane potential in the vessels. While exploring the role of hydrogen sulfide in septic shock, he also discovered that interleukin-10 knockout mice, a model of frailty, not only are prone to sepsis due to lack of immune response, but also develop cardiac and vascular dysfunction with increased ageing due to increased production of eicosanoids, specifically via COX-2 activity and resultant thromboxane A2 receptor activation.

While in internal medicine training, he was also involved in a non-randomized study to examine a novel route of drug delivery, iontophoresis, in individuals with spinal cord injury and presented his clinical work at international conferences.

Having serendipitously discovered “photorelaxation”, the light-dependent relaxation of blood vessels, he began to study its mechanism and found that this wavelength-specific, blue-light activated molecular switch was composed of non-image forming opsins (photoreceptors) that appeared to involve the generation of cGMP to activate a K+ channel, causing hyperpolarization and relaxation. These responses were observed in both systemic and pulmonary blood vessels.

During Pulmonary and Critical Care training at Johns Hopkins University, he began exploring the mechanisms involved in the pathogenesis of pulmonary hypertension (PH). Along with Dr. Shimoda, he wrote invited review article on role of hypoxia-inducible factors in pulmonary hypertension. He elected to test the hypothesis that photoreceptors play a role in regulating apoptosis, particularly in smooth muscle cells in the context of PH; work was funded by National Institute of Health (NIH)