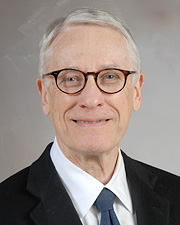 Dr. Gould was born and raised in rural south Alabama, graduating from McCally Military Academy followed by Oberlin College where he received degree in physics. He then entered Case Western Reserve Medical School. After receiving his MD degree he completed medical residency at the University of Washington in Seattle followed by two years in the Epidemic Intelligence Service based in Hawaii covering the South Pacific and focusing on leprosy and measles in island populations. He returned to Seattle for Cardiology training under Dr. Robert Bruce, the developer of the treadmill test he pursued research on coronary artery disease and achieved Associate Professor in 1976. In 1979, he moved to The University of Texas Health Science Center at Houston (UTHealth) as Professor and Director of the Division of Cardiology, and founding Director of the Positron Diagnostic and Research Center. Dr. Gould stepped aside from administrative duties in 1987 to focus clinically and scientifically on PET imaging and quantitative coronary arteriography for identifying segmental and diffuse coronary artery disease, measuring its severity and reversing it by vigorous risk factor modification. This effort has evolved into a full time clinical and research commitment to the comprehensive, primarily non-invasive management of coronary artery disease, both prevention and reversal of disease.

Dr. Gould received the International George von Hevesy Prize for Research in 1978, the George E. Brown Memorial Lectureship of the American Heart Association in 1990, numerous teaching awards in both basic science and clinical cardiology, and has been honored nationally by membership in the Association of American Physicians, the American Society of Clinical Investigation and the Board of Trustees of the American College of Cardiology. He served 11 years as an Associate Editor of Circulation and is currently on the editorial boards of major cardiovascular journals. He is past chairman of the Council on Circulation of the American Heart Association, and past president of the Houston Cardiology Society.

Dr. Gould has published the first and only textbook on quantifying coronary artery narrowing, coronary blood flow and cardiac PET imaging, entitled Coronary Artery Stenosis and Reversing Atherosclerosis, 2nd edition, Arnold Publishing, London, 1998. He has also published Heal Your Heart, How to Prevent or Reverse Heart Disease, the first popular book to distill an extensive scientific literature into simple graphics and text for general non-medical readers. Dr. Gould has received 26 years of continuous competitive research grant funding from the National Institutes of Health, the American Heart Association and/or the Veterans Administration Career Development program. He currently holds the Martin Bucksbaum Distinguished University Chair and is Professor and Executive Director of the endowed Weatherhead P.E.T. Center for Preventing and Reversing Atherosclerosis.