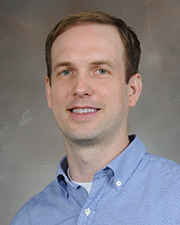 Dr. De Lay is an Associate Professor in the Department of Microbiology and Molecular Genetics at UTHealth Houston’s McGovern Medical School. Dr. De Lay joined the department in 2013 after completing his postdoctoral research fellowship with Dr. Susan Gottesman at the National Cancer Institute at the National Institutes of Health (NIH) in Bethesda, MD. Dr. De Lay received his Ph.D. from the Department of Microbiology at the University of Illinois at Urbana-Champaign after completing his doctoral thesis work in the laboratory of Dr. John Cronan, and earned his B.A., cum laude, from Cornell University in Ithaca, NY. At Cornell University, Dr. De Lay carried out his undergraduate thesis work in the laboratory of Dr. Stephen Winans.

Dr. De Lay’s research is focused on the posttranscriptional regulation of gene expression by small noncoding RNAs (sRNAs) in the model organism Escherichia coli. Dr. De Lay is interested in understanding on a mechanistic level how an sRNA that is transcribed in response to a particular stress or environmental cue ultimately leads to changes in gene expression and the behavior of cells.

Small noncoding RNAs (sRNAs) that regulate gene expression by base-pairing with target mRNAs are found in all three domains of life.  In many bacterial species including numerous human pathogens, a large class of these sRNAs bind to an RNA chaperone called Hfq. Hfq stabilizes the sRNA and facilitates pairing to a short complementary sequence in a target mRNA. Pairing of the sRNA to the mRNA results in either a decrease in mRNA stability and/or translation (negative regulation) or an increase in mRNA translation (positive regulation). Disrupting sRNA-mediated regulation in bacteria by deleting hfq results in defects in growth and/or virulence and an increased sensitivity to antibiotics. These results suggest that proteins critical for Hfq-dependent sRNA-mediated regulation may be good targets for antibiotics. The identification of new molecular targets of antibiotics is of growing importance given the rising occurrence of multi-drug resistance among gram-negative bacterial pathogens.

The second focus of my laboratory is on understanding the role of sRNAs in regulating bacterial behaviors such as motility, biofilm development, and pathogenesis. The species E. coli consists of many different pathogenic strains that cause a variety of diseases in humans ranging from diarrhea to neonatal meningitis to urinary tract infections. Hfq-dependent sRNAs play an important role in the pathogenesis of these E. coli strains. The long term goals of this research are to understand the differences in the repertoire of sRNAs and their targets among these diverse E. coli strains and how this variation contributes to differences in motility, biofilm development, and interactions with hosts.