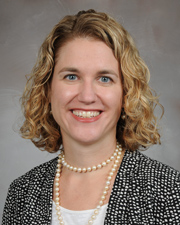 The emergence of untreatable bacterial infection in modern medicine is due to several factors. The hospital patient population is increasingly elderly and immune-compromised, creating a pool of susceptible hosts. The overuse of antibiotics has provided the necessary selective pressure for the development of resistance. Pathogenic bacteria have seemingly endless versatility in creating and sharing mechanisms of resistance. As the development of antibiotic resistance continues to erode one of the greatest advances in modern health care, it is crucial to identify alternative strategies that can form the basis of novel anti-infective therapies. One approach is to target the immune response to more effectively dispel infection.

To this end, one focus of my laboratory’s research includes studies of the host response to pathogens using a tiny worm called C. elegans as a model host. C. elegans has favorable characteristics that include a short 3-day lifecycle during which hundreds of progeny are produced, small size and ease of laboratory cultivation, a fully sequenced genome and a vast array of molecular and genetic tools and resources. Interestingly, C. elegans become sick and die when fed on many human pathogens, making this approach possible. Importantly, many of the same immune defense signaling pathways and mechanisms employed by higher animals appear to also be at play in the worm. For example, my laboratory discovered that C. elegans produces reactive oxygen species (ROS) in response to pathogens, a defense mechanism analogous to the oxidative burst that occurs in human phagocytic cells. We are in the process of identifying the machinery and the regulators that generate this response, characterizing its role in C. elegans immunity, and ultimately applying our knowledge to better understand this response in humans.

Our studies of host immune response to human bacterial infection are particularly focused on Enterococcus faecalis now the second or third most common hospital-associated infection, but amenable to laboratory studies due to the existence of a complete array of molecular tools. In a screen for mutants attenuated in killing C. elegans we discovered that mutations in an operon encoding for ethanolamine utilization affected virulence. We have focused our studies on dissecting the regulation of this operon, as it contains several novel features associated with post-transcriptional regulation. These include an AdoCbl-binding riboswitch and a series of transcription terminators regulated by an RNA-binding two-component system. We are now dissecting how these features work together to turn on and off the expression of the ethanolamine genes as well as studying the spatio-temporal dynamics of the ethanolamine-specific microcompartments that form to carry out the metabolism.

Finally, my lab is engaged in a collaborative project with the Lorenz Laboratory studying the interactions of E. faecalis with the human fungal pathogen Candida albicans. We have recently identified a peptide secreted by E. faecalis that inhibits the pathogenicity and biofilm formation of C. albicans; it showed therapeutic potential in a mouse model. We are starting to examine how C. albicans, likewise, inhibits the virulence and biofilm formation of E. faecalis.