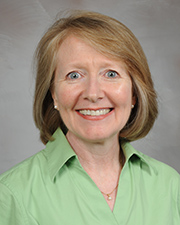 Dr. Koehler, Chair Emerita of the Department of Microbiology and Molecular Genetics, came to McGovern Medical School as an assistant professor in 1991, following a postdoctoral fellowship at Harvard Medical School. She earned her B.S. in Biology from Virginia Tech, and M.S. and Ph.D. in Microbiology from the University of Massachusetts.

Dr. Koehler is an elected Fellow of the American Academy of Microbiology in recognition of her outstanding contributions to the science and profession of microbiology. Her research expertise is in bacterial genetics and physiology. She is an internationally recognized anthrax expert, and her NIH-funded research program on Bacillus anthracis spans more than 30 years. Dr. Koehler’s NIH service includes chairing the Bacterial Pathogenesis study section, and membership and chair positions on several Special Emphasis grant review panels. She most recently served on an NIH Center for Scientific Review ENQUIRE Panel to make recommendations for overhauling scientific review panel design and composition.

Dr. Koehler has chaired numerous national and international scientific conferences and served on the editorial board of multiple journals. She has been a member of several advisory boards for state and federal science committees, including the National Science Advisory Board for Biosecurity. As President of the Association of Medical School Microbiology and Immunology Chairs, Dr. Koehler led professional development conferences to connect chairs from over 100 medical schools in the U.S., Canada, and Mexico. Locally, Dr. Koehler is committed to training graduate students, medical students, and postdoctoral fellows. She is the Co-Director of an NIH T32 training grant, and a past awardee of the Paul E. Darlington Award from the M.D. Anderson UTHealth Graduate School for Biomedical Sciences for outstanding mentoring of graduate students.

Bacillus anthracis, a Gram-positive spore-forming soil bacterium and member of the Bacillus cereus group species, is distinguished by its ability to cause anthrax in mammals. Depending upon the route of entry, infection with spores can result in cutaneous disease, which is readily treatable with antibiotics, or systemic disease, which is often fatal. The continuing worldwide incidence of anthrax in animal populations, risk of human infection associated with animal outbreaks, and potential for use of B. anthracis as a biological weapon, warrant continued investigation of this organism and its virulence mechanisms.

Virulence of B. anthracis is associated with synthesis of the anthrax toxin proteins, protective antigen, lethal factor, and edema factor, and an antiphagocytic capsule composed of poly-D-glutamic acid. Our work focuses on the genetic basis for expression of the structural genes for the toxin proteins, pagA, lef, and cya, the capsule biosynthesis operon, capBCAD, and other genes with a known or suspected role in virulence. The toxin genes are located on pXO1 (182-kb), while the capsule genes are found on pXO2 (93-kb).

The model for virulence gene regulation in B. anthracis is of growing complexity and includes numerous trans-acting regulators. The most critical and far-reaching regulator is atxA, a pXO1 gene that appears to be unique to the species. atxA is essential for expression of all toxin genes, contributes to control of the capsule operon, and affects expression of numerous chromosomal genes. We are establishing the molecular functions and epistatic relationships of atxA and other regulators. Using a mouse model for inhalation anthrax, we are evaluating gene expression and development in vivo, including spatial and temporal measurements of germination and dissemination.

In related studies, we are examining the relatedness of B. anthracis to the closely-related, but less harmful species, B. cereus and B. thuringiensis. The three species are very similar physiologically and genetically, yet they cause vastly different diseases. With certain important exceptions, key differences in gene expression, as opposed to genetic content, may result in the differing pathogenesis associated with these species.

We are also interested in the B. anthracis lifecycle outside of the mammalian host. We are studying B. anthracis germination and multiplication in the soil, particularly in association with the plant rhizosphere. These investigations have implications for genetic exchange between B. anthracis and other soil organisms and for detection of the bacterium in the environment.