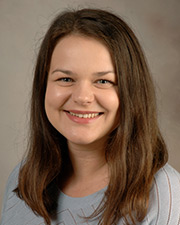 Dr. Konovalova is an Assistant Professor in the Department of Microbiology and Molecular genetics at UTHealth Houston’s McGovern Medical School. Dr. Konovalova joined the department in 2017 after completing her postdoctoral training with Professor Thomas J. Silhavy at Princeton University in Princeton, USA.

Dr. Konovalova received her Ph.D. in 2011 for her graduate thesis work in the laboratory of Prof. Lotte Søgaard-Andersen at the Max-Plank Institute for Terrestrial Microbiology in Marburg, Germany.

Dr. Konovalova is a recipient of the Texas Rising STAR Award (2017).

Our lab is focused on the biogenesis and maintenance of bacterial cell surfaces. We are particularly interested in the following areas:

Many Gram-negative bacteria are notoriously hard-to-treat pathogens, due in part to the presence of an outer membrane (OM). The OM surrounds and protects the cell from harmful substances, including antibiotics and host immunity factors. It also serves as an interaction interface between bacteria and their host. Until recently it was believed that surface-exposed proteins are represented exclusively by integral barrel-shaped outer membrane proteins (OMPs), while peripheral lipoproteins that are tethered to the OM by lipids always faced the interior of the cell, specifically the compartment between the OM and the cytoplasmic membrane, which is called the periplasm. However, recent work, including our own research on the lipoprotein RcsF, has revealed the presence of lipoproteins on the cell surface (surface-exposed lipoproteins, SLps).

This new research uncovered important roles for SLps in bacterial physiology, host interactions, and pathogenesis. For example, RcsF is a sensory component of the Rcs signal transduction pathway is a bacterial defense system that detects and prevents OM damage caused by host immune factors and antibiotics, and is essential for the survival of enteric bacteria inside the host. Other SLps have been found to be important for nutrient and iron acquisition, adhesion, and immune evasion functions. Moreover, SLps serve as important antigens and are useful targets for vaccine development.

We use an interdisciplinary approach, including genetic, biochemistry and mass spectrometry, to study how SLps localize to the cell surface, and what the role SLps play in host-microbe interactions.

Bacterial cell envelope is an essential organelle; it serves as a protective barrier of the cell and determines cell shape. However, it also carries out many dynamic cellular processes including active nutrient uptake, energy generation, protein secretion as well as communication between the cell and the environment.

Our immune system produces multiple factors that target bacterial envelope. Among them are cationic antimicrobial peptides (CAMPs) that destabilize the outer membrane (OM) by binding to the surface glycolipid called lipopolysaccharide (LPS) and make bacteria sensitive to lysozyme and other factors. But bacteria, in turn, have evolved an Rcs envelope stress response to reinforce their membrane when antimicrobial peptides are present. However, it was not clear how the bacteria sensed the presence of these peptides, because LPS is found exclusively in the outer leaflet of the OM, while the sensory component of this stress response, a lipoprotein RcsF, was believed to be tethered to the inner leaflet of the OM facing the periplasm instead of the cell surface.

We have discovered that RcsF is threaded through barrel-shaped proteins, called OMPs, to expose an N-terminal domain on the cell surface. This novel type of OM protein complexes are assembled by the beta-barrel assembly machine, the Bam complex, uncovering its unexpected role in biogenesis of the surface-exposed lipoproteins. We have isolated several mutants of Escherichia coli that still make RcsF but are unable to localize it to the cell surface due to defects in the assembly of the RcsF/OMP complexes.  We showed that these mutants are essentially “blind” to the presence of antimicrobial peptides, and proving that it is the surface-exposed domain that works as the sensor.

Our current work focuses on how the stress signal is transmitted from the cell surface inside the cells to promote survival under antibiotic treatment.