Dr. Krachler joined the faculty of the Department of Microbiology and Molecular Genetics at UTHealth Houston’s McGovern Medical School as an Associate Professor in September 2016. She completed her undergraduate and masters degree in Chemical Engineering at the Vienna University of Technology, Austria, before training for a Ph.D. in Biochemistry with Colin Kleanthous at the University of York in the UK. After joining Kim Orth’s lab at UT Southwestern Medical Center as a postdoctoral fellow, she moved to the University of Birmingham as an EMBO Fellow and Birmingham Fellow in 2012, where she first established her independent laboratory.

Dr Krachler’s research on bacteria-host interactions has been recognized by several awards, including a Texas Rising STAR award (2016), the Biochemical Society’s Early Career Research Award for Biological Systems (2015) and a Founder’s Award (2015).

We take a highly interdisciplinary approach to study information exchange at the bacteria-host interface. The main questions driving this work are “How do bacteria perceive the host and react to switch on colonization and virulence mechanisms? And how, in turn, does the biophysical process of bacterial adhesion affect the host in a way that facilitates colonization and infection?” While deepening our understanding of the basic biology of bacteria-host interactions, we concurrently work on translating our discoveries into clinically relevant applications, focusing on novel therapeutics to combat drug-resistant bacterial infections. Some of the projects we are currently pursuing are:

Antimicrobial resistance is a growing threat to human health, and many bacterial infections are becoming difficult to treat as a result. We are developing novel anti-infectives, which inhibit infections by blocking a pathogen’s ability to stick to tissue and wound surfaces and facilitate their removal from the host. This work involves biochemistry and biological chemistry for the design and characterization of such inhibitors. We also collaborate with mathematicians and clinicians, to predict how modifications to the inhibitors will improve their potency, and then evaluate their use against drug-resistant wound- and surgical site infections.

Vibrio cholerae is an abundant environmental bacterium, but upon ingestion by a human host through consumption of contaminated water, it can efficiently colonize the intestinal tract and trigger the severe diarrheal illness cholera. The disease is still endemic in many regions across the world, and low-tech, cost-effective methods to prevent transmission are needed. We are developing synthetic materials that modulate bacterial behaviour. Examples include materials that interfere with quorum sensing, the bacteria’s way of communicating, or materials that mimic environmental biofilms, rendering bacteria non-virulent. We study the effects of these materials on bacterial phenotypes and infection, using a combination of bacterial genetics, and tissue culture and zebrafish infection models. 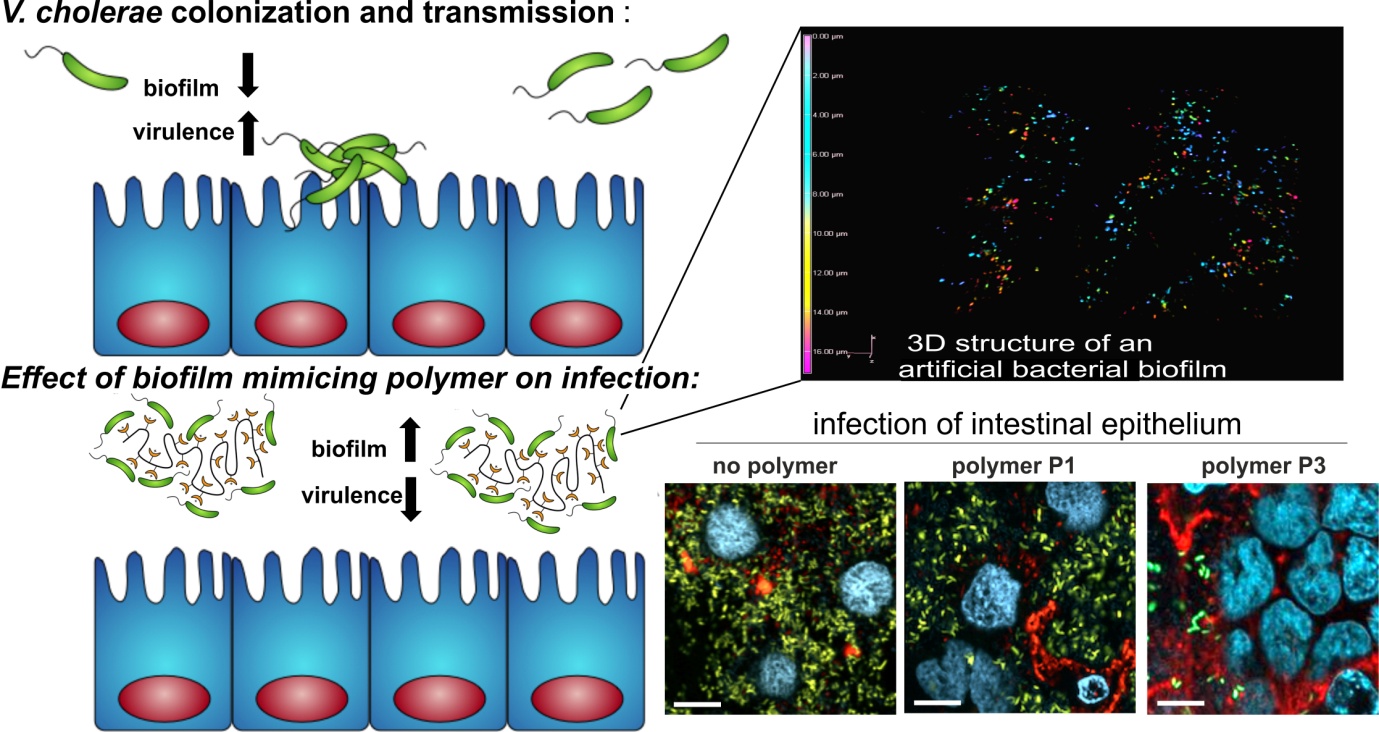 3.  Discovering how bacteria perceive and react to mechanical cues in the GI tract to initiate colonization

The five senses – sound, sight, touch, smell and taste – are classically attributed to humans and other higher organisms. They are based on the capacity to perceive physical and chemical cues, and define the way we function within our environment. In contrast, our knowledge of senses in prokaryotes, such as bacteria, is lagging far behind. Our group recently discovered that the sense of touch also occurs in the bacterium Escherichia coli.  Enterohemorrhagic Escherichia coli (EHEC), a major cause of diarrheal disease, responds to subtle variations in force levels it encounters within the host. When force levels increase through adhesion and fluid shear in the GI tract, EHEC switch on the expression of virulence factors. We are investigating how EHEC perceive and transduce the mechanical cues inside the host, and how mechanosensing affects intestinal colonization and disease progression, using a combination of biochemical and genetic assays, and infection models.