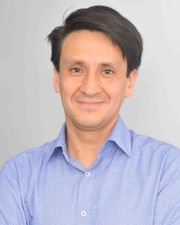 Dr. Pérez grew up in Ecuador. He received his B.S. in Biology from the Catholic University of Ecuador in Quito. To pursue a career in biomedical research, he moved to the USA. He first completed a M.S. degree in Molecular Biology at Saint Louis University under the guidance of Dr. Barrie Bode. He then joined the Ph.D. Program in Molecular Genetics and Genomics at Washington University in St. Louis, studying mechanisms of gene regulation in enteric bacteria in the laboratory of Dr. Eduardo Groisman.

Dr. Pérez started working with the yeast Candida albicans in the laboratory of Dr. Alexander D. Johnson at the University of California, San Francisco. He then moved to Germany to establish his own laboratory at the University Hospital Wuerzburg. Dr. Pérez joined the faculty of the Department of Microbiology and Molecular Genetics at UTHealth Houston’s McGovern Medical School as an Associate Professor in November 2020.

Transcriptional circuits are central to the regulation of many biological processes. The laboratory is interested in understanding these circuits’ underlying logic and structure, how they control particular traits of interest and how they change over evolutionary timescales. Our main experimental organism to address these questions is Candida albicans, the most prominent yeast species residing in healthy humans and also a major cause of serious fungal infections. We seek to gain insights into the biology of this unicellular eukaryotic organism through the study of its transcriptional regulatory circuitry.

C. albicans is a prominent non-bacterial member of the gut microbiota in humans. The laboratory has adopted a gnotobiotic mouse model of gut colonization in which we can establish mono- or co-colonization with microbes of interest. Using a combination of high-resolution fluorescence microscopy and several -omics approaches, this experimental system is allowing us to investigate (1) the host responses elicited by commensal fungi in the intestine and (2) the in vivo interplay between fungal and bacterial members of the gut microbiota.