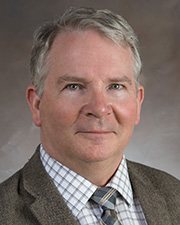 John C. Mosher received his Bachelors in Electrical Engineering with Highest Honors from the Georgia Institute of Technology in 1983. From 1981–1982 he was an exchange scholar student with the Eidgenössische Technische Hochschule Zürich, Switzerland. From 1979–1983 he was also a Cooperative Education student with Hughes Aircraft Company in Fullerton, California. From 1983–1993, he worked at TRW in Los Angeles,California, as a scientist and senior scientist researching signal analysis procedures for electromagnetic pulse effects on aircraft. While at TRW, he received his M.S. (1985) and Ph.D. (1993) in Electrical Engineering from the Signal & Image Processing Institute of the University of Southern California. Upon graduation in 1993, he accepted a staff position at the Los Alamos National Laboratory, Los Alamos, New Mexico. In May 2008, he moved his research programs from Los Alamos to the Epilepsy Center in the Cleveland Clinic Neurological Institute, to become their Director of Magnetoencephalography Research.

Since 1994, Dr. Mosher has been without interruption a Principal Investigator or Co-Investigator on competitive grants from the National Institutes of Health, as well as several competitive Los Alamos Laboratory Directed Research and Development grants. In his research role, he has served as a formal Mentor of Laboratory-employed students and post-docs, and as an informal mentor of his collaborator’s students and postdocs. Working closely with these students and his collaborators, he has continuously published in his field of biomedical research since 1990.

As of January 2018, Dr. Mosher has over 8,300 citations to over 175 papers appearing in Google Scholar.His landmark paper in 1992 remains today one of the most cited original research papers in magnetoencephalography, with over 1,100 total citations of the original article. His 2001 paper with colleagues is rapidly becoming one of the most cited review papers on electromagnetic brain mapping, also with over 1,300 citations. Additionally, his 1992 paper was included in the landmark 1993 review paper, “Magnetoencephalography — theory, instrumentation, and applications to noninvasive studies of the working human brain,” (Hämäläinen et al., Reviews of Modern Physics), which itself now has 4,000 citations, making Dr. Mosher’s notation and approach one of the standards in MEG signal processing.