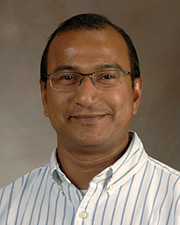 My current research is aimed at developing a sensitive method to detect misfolded oligomers in biological fluids to be used as possible markers for early diagnosis of neurodegenerative diseases including Alzheimer’s disease (AD) and Parkinson’s disease (PD). Further, to expand the understanding of possible mechanism(s) involved in these diseases and to develop early therapeutic approach, my research also involved the isolation and characterization of toxic aggregates from human AD and PD brains and evaluating their cytotoxic effects in different types of human neurons in vitro.

The early diagnosis of neurodegenerative diseases such as Alzheimer’s disease (AD) and Parkinson’s disease (PD) is of utmost importance for the development of disease-modifying or preventive therapies. The central event in AD and PD is misfolding, aggregation and accumulation of amyloid beta peptide (Aβ), Tau and alpha-synuclein (α-Syn) that begins years or decades before the appearance of clinical symptoms. Most importantly, these misfolded oligomers circulate in biological fluids, such as cerebrospinal fluid (CSF) and blood. We have devised a sensitive method to detect tiny amounts of these oligomers present in the biological fluids adapting our Protein Misfolding Cyclic Amplification (PMCA) technology. Using CSF, PMCA amplification of Aβ and α-Syn oligomers allowed us to distinguish AD and PD patients from control individuals affected by other neurodegenerative disorders or nondegenerative neurological diseases. More recently, we have adapted this PMCA technology to detect these oligomers in blood plasma to develop non-invasive diagnostic tests for AD and PD.