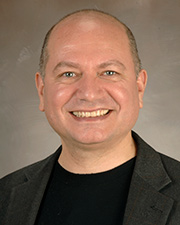 Yuri Dabaghian, PhD is an Assistant Professor in the Department of Neurology at UT Health Department of Neurology. He began his career as a theoretical physicist working in quantum chaos theory, having obtained his Master’s degree at the Landau Institute for Theoretical Physics in Moscow, Russia and his PhD in theoretical and mathematical physics at the University of Rhode Island. Deciding to pursue the geometric and topological ideas from a different perspective, he was awarded a Sloan Swartz fellowship to study experimental and computational neuroscience at UCSF, where he researched principles of spatial perception and spatial memory. His current research interests lay in developing computational and theoretical models of hippocampal spatial memory, principles of geometric information processing in the brain, and developing complexity measures of spatial behavior and memory tasks.