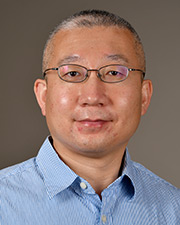 Dr. Wang received his Bachelor’s degree in Microbiology from Nankai University, China, and obtained his PhD degree in Biochemistry from The Ohio State University. He joined The University of Texas Health Science Center at Houston as a Postdoctoral Research Fellow in the Department of Neurology in 2018 and was appointed as an Assistant Professor at the Mitchell Center for Alzheimer’s Disease & Brain Disorders in 2021. Dr. Wang has published more than 20 peer-reviewed articles with more than 1,800 citations. His broad research interests encompass the protein misfolding-associated neurodegenerative diseases, such as Prion disorders, Alzheimer’s and Parkinson’s diseases.

The protein misfolding-associated neurodegenerative diseases (NDs), such as Prion disorders, Alzheimer’s and Parkinson’s diseases are characterized by the progressive losses of neurons in different brain regions. A shared feature among these NDs is the accumulation of disease-associated, misfolded proteins, such as Amyloid- or Tau fibrils in Alzheimer’s disease, -Synuclein aggregates in Lewy bodies and Lewy Neurites of Parkinson’s disease and other  -Synucleinopathies, or PrPSc aggregates in Prion disease, which are believed to be the major cause of neurodegeneration. The Prion mechanism explains how misfolded proteins can lead to these diseases, which is that misfolded proteins, once formed in a specific brain region, can spread by acting as templates to seed the misfolding of normal proteins in other brain regions and cause neuronal loss. My research goals are to explore the neurotoxic mechanisms and pathways that lead to the neurodegeneration or death of neurons and to develop the effective therapeutic strategies against these currently incurable conditions.