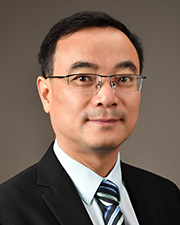 Dr. Liu started his postdoctoral training at the University of Connecticut Health (UHC) in 2006. Before that he had been a Neurologist in Wannan Medical College Yijishan Hospital (China) for seven years. After 5-year postdoc training Dr. Liu was awarded a Scientist Development Grant from American Heart Association (AHA) and appointed as an Assistant Professor of UHC in 2012. Dr. Liu joined the Department of Neurology at the University of Texas McGovern Medical School in 2015 and serves as the Director of Translational Stroke Research in addition to his commitment to teaching. Dr. Liu has been selected as a grant review committee member for AHA Brain Study Section, and chaired symposiums at international conferences. In 2019 Dr. Liu was promoted to tenured Associate Professor. Being PI on multiple NIH grants (R01s and R21s), Dr. Liu dedicates himself to research in stroke, and also to teaching/mentoring students/fellows.

Neuroinflammation and sex differences in stroke

Research interests in Dr. Liu’s lab focus on innate immune responses and sex differences in cerebral ischemia. Post-stroke inflammation is characterized as either pro- or anti-inflammatory response to neuronal damage, and significantly contributes to stroke pathology as well as functional recovery. We explore regulatory pathways underlying the neuroinflammation aiming to suppress pro-inflammatory and/or promote anti-inflammatory activation of immune cells. Stroke is a sexually dimorphic disease throughout the lifespan. We are interested in how the sex-specific stroke phenotypes are regulated in neonatal, young and aged brains. While hormonal effects play important roles in the sex difference in young stroke patients, we have found chromosomal effects in mediating the stroke sensitivity in aged brains. By using genetically modified animal models, we study X escapee genes that escape from X chromosome inactivation, and try to understand whether and how these genes impacts on the sexual dimorphism.