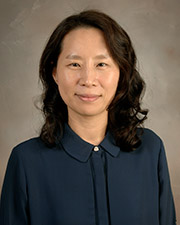 Dr. Jung received her Ph.D. from Seoul National University in South Korea. Then, she was trained by Dr. Pak Chan in the Department of Neurosurgery at Stanford University School of Medicine from 2007 to 2011. After post-doctoral training at Stanford, she joined the Neuroprotection Research Laboratory (NPRL) led by Dr. Eng Lo at Harvard Medical School (HMS) and Massachusetts General Hospital (MGH). She was promoted thereafter to an instructor and dedicated to stroke research at HMS/MGH until 2017. In 2017, she joined University of Texas Health Science Center in the Department of Neurology as an Assistant Professor.

Main research interest in Dr. Jung’s lab is to identify novel cells-to cells communication, which contributes to stroke recovery via mitochondria-derived small peptides (MDPs) in neurovascular unit. Dr. Jung has been investigating role of mitochondrial peptide transfer among cells in brain, which is involved in neuronal ROS defense, plasticity, and regeneration, as well as microglial switch for cleanup, repair, and functional recovery after stroke. She also has been studying transcriptional changes in oxidative stress-induced genes which are regulated by Signal Transducer and Activator of Transcription (STATs) and other transcription factors. She demonstrated that the mitochondrial-localized antioxidant protein, Mn-SOD is transcriptionally regulated by STAT3 and is a potent neuroprotectant via blocking ROS overproduction in response to brain injury. This discovery laid the groundwork for a better understanding of the role of mitochondria in stroke recovery. Dr. Jung’s research aims to develop the translational approach targeting functional mitochondria in order to prevent neuronal impairment and promote brain remodeling after stroke.