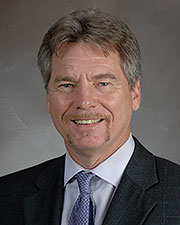 Pulmonary surfactant proteins (SP’s) play key roles in the function and defense of the lung; SP-B and SP-C are crucial in reducing alveolar surface tension while SP-A and SP-D are key in pulmonary host defense and modulation of inflammation. Our research interests revolve around understanding the role of surfactant proteins in two severe pathologies affecting prematurely-born neonates; respiratory distress syndrome (RDS) and necrotizing enterocolitis (NEC).

While the lack of SP-B due to premature birth can lead to lung dysfunction and RDS, antenatal administration of glucocorticoids increases SP-B expression, in part, by increasing SP-B mRNA stability. We have identified sequences in the human SP-B mRNA 3’-untranslated region necessary for increased mRNA stability and are now identifying proteins that bind to these sequences. Our goal is to define this regulatory mechanism in order to devise therapies to accelerate SP-B expression in premature infants without the use of glucocorticoids.

NEC is a devastating disease often associated with pre-maturity that results in partial or total destruction of the immature intestine via inappropriate bacterial colonization and rampant inflammation. In the lung, SP-A functions to reduce bacterial colonization and inflammation, and SP-A is expressed in the gastrointestinal tract. We found that SP-A reduces inflammatory cytokines in the intestine and colon of neonatal mice. In addition, we find that SP-A can reduce pathology in rodent models of NEC. SP-A appears to reduce levels of a key player in NEC, toll-like receptor-4 (TLR4) through increased proteasomal degradation. Our goal is to define the protective mechanism of SP-A in immature intestine and establish a link between the incidence of NEC and intestinal SP-A levels. These studies provide may a new paradigm in which the under-appreciated extra-pulmonary functions of SP-A may help protect the immature intestine. Defining the mechanism of this protection will allow us to design therapies that exploit the immunomodulatory properties of SP-A to prevent and treat NEC in prematurely-born infants.