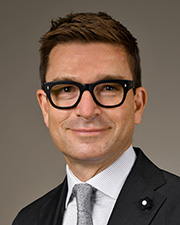 Dr. Oderich focuses on the clinical evaluation, open surgical and endovascular treatment of aneurysms, dissections, trauma and aortic pathology involving any segment of the aorta, including the aortoiliac, juxtarenal, pararenal, complex abdominal, thoracoabdominal and aortic arch. He serves as Professor and Chief of Vascular and Endovascular Surgery at McGovern Medical School at UTHealth, and is the Clinical Director for the Advanced Endovascular Aortic Program. Dr. Oderich is a world-renowned authority on innovative minimally invasive endovascular techniques to treat complex aortic aneurysms using fenestrated and branched stent-grafts. He serves as the Global Principal Investigator for the upcoming Cook Zenith Plus and Thoraco Plus trials and Chairs the Society for Vascular Surgery Reporting Standards on endovascular repair of complex aneurysms and the WL Gore Steering Anatomical Committee for the TAMBE (Thoraco-Abdominal Multi-Branch Endoprosthesis) trial.  Dr. Oderich has performed over 5,000 open and endovascular repairs, including >2,000 endovascular aortic repairs (EVARs) and 700 fenestrated-branched endovascular repairs (FEVARs), bringing over two decades of experience from the Mayo Clinic. He was mentored by pioneering surgeon Roy Greenberg at the Cleveland Clinic and continues to evolve on improvements in complex endovascular techniques. He is one of eight surgeons in the United States, and the only surgeon in Houston to have physician sponsored, Federal Drug Administration (FDA) approved access to the entire pipeline of company manufactured Cook fenestrated and branched stent-grafts to treat aortic arch, thoracoabdominal and complex abdominal aortic aneurysms. He is also involved in many industry sponsored device trials with the largest worldwide experience in the Gore TAMBE (ThoracoAbdominal Multi-Branch Endoprosthesis).  Dr. Oderich has also a versatile open surgical and endovascular practice in other areas, including management of carotid, supra-aortic trunk, renal and mesenteric artery diseases. He is also involved in the multidisciplinary care of patients with connective tissue disorders including Marfan’s, Loeys-Dietz Syndrome and Vascular Ehlers Danlos Syndrome.

Dr. Oderich served as immediate past Chair of the Vascular and Endovascular Surgery at the Mayo Clinic in Rochester, Minnesota, where he practiced for over two decades and oversaw the efforts of The Mayo Clinic Aortic Center program.  The Aortic Center spearheaded and developed extensive experience with endovascular repair of aortic aneurysms and dissections using such devices, with significant reduction in mortality and morbidity compared to results of open surgical repair. He has joined the University of Texas Health Science Center at Houston in July 2020 and now serves as Professor of Surgery and Chief of Vascular and Endovascular Surgery for the McGovern Medical School, Director of the Aortic Center and Director of the Advanced Endovascular Fellowship Program.

Dr. Oderich is a genuine academic surgeon who has become world renowned for advancements in fenestrated and branched stent-graft technology. He was instrumental in the initial development of physician-modified endovascular grafts (PMEGs), which still are used by many surgeons who do not have access to company manufactured fenestrated and branched stent-grafts. His experience evolved primarily to company manufactured fenestrated and branched stent-grafts, which provide better quality control and more versatility for complex endovascular repair. Dr. Oderich mentored and trained 58 vascular residents and fellows, over 20 research students and hosted over 150 international surgeons who came to the Mayo Clinic to observe his endovascular techniques. He is the Editor of the first edition of the textbook entitled “Endovascular Aortic Repair: Current Techniques of fenestrated, branched and parallel grafts”, which is considered the Bible of complex endovascular repair. He is a member of 17 national and international surgical and vascular societies, including the prestigious Society for Vascular Surgery, European Society for Vascular and Endovascular Surgery and American Surgical Association. Dr. Oderich serves as Associate Editor of the Annals of Vascular Surgery and of the Journal of Cardiovascular Surgery and is a full member or ad hoc member of the Editorial Board of 62 medical and surgical journals. He has delivered over 690 lectures and addresses in national and international meetings, including the prestigious Roy Greenberg Lecture at the Society for Vascular Surgery meeting. Dr. Oderich has also lectured as Invited Professor in 30 academic institutions including Harvard, Stanford, UCLA, Federal Drug Administration, Université de Montréal (Montreal, Quebec Canada), University of Bologna (Bologna, Italy), Kings College and Guys Hospital (London, UK) and the Universities of Paris, (Paris, France), Nuremberg (Nuremberg, Germany) and Munich (Munich, Germany). His bibliography is extensive with over 760 publications, including 3 edited books, 301 peer-reviewed articles, 318 abstracts, 127 book chapters and 23 letters and editorials. Some of his landmark publications include the results of the United States Zenith Fenestrated Clinical Trial and the updated outcomes of his physician-sponsored fenestrated-branched stent-graft trial.

Dr. Oderich offers telemedicine appointments, allowing patients to receive consultations and follow-up care from the comfort of their home (no traffic, no partking and no crowds). Undergoing complex endovascular aortic repair can be daunting, but Dr. Oderich wants to assure his commitment to best quality outcomes that can be achieved. His practice philosophy is compassion, excellence and availability. You can learn more about Dr. Oderich listening to the Podcast below. If you send him an email you can be assured you will get a personal response. Contact him if you have questions at gustavo.oderich@uth.tmc.edu or schedule an appointment via email with his assistant or via phone by calling 713.486.5139.

“How Dangerous is an Aneurysm?” by Sanjay Gupta, MD