At the age of 2, Gracie Norman had three types of seizures regularly: tonic-clonic, also known as grand mal; complex partial, with multiple symptoms of impaired awareness; and absence, or sudden and brief lapses of consciousness. By the time she was 4, the periods of absence were gone, and her parents, Monica and Michael Norman faced the challenge of trying to help with managing the tonic-clonic and complex partial seizures. 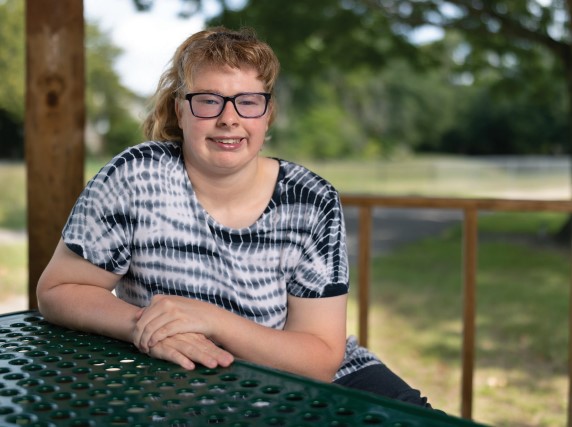 “I was still relatively new to this, but I understood that Gracie’s case was particularly complex,” Norman says. “I’m in a special-needs moms network and an epilepsy network, and I heard that Dr. Von Allmen was the best in Houston. She saw us and said she was certain she could help Gracie, but that it would be a long process.

She would not recommend anything radical, but rather we would work through Gracie’s epilepsy methodically. We were comfortable with her and with that approach.”

As a first step, Von Allmen changed Gracie’s medications. “The new medications helped – she was no longer zombielike – but she was still having one or two tonic-clonic seizures a month and a couple of complex partials a week,” Norman says. “I kept asking, ‘Are we doing as much as we can?’”

To better understand her particular seizures, Von Allmen asked that Gracie spend a week in the Epilepsy Monitoring Unit (EMU), one of the largest and most comprehensive of its kind in the southwestern United States. There, she underwent a video electroencephalogram (EEG), a diagnostic procedure using EEG and video recordings simultaneously to monitor seizure activity.

“To get an accurate picture of her seizures, we took her off her medications,” Norman says. “Watching your child have seizures grounds you in how serious her condition is and how well
the medications are working, even if they don’t stop the seizures. Without the medications, it is much, much worse.”

After seeing the results of Gracie’s tests in the EMU, Von Allmen believed that she might benefit from implantation of a vagus nerve stimulator (VNS). Implantable vagus nerve stimulators are approved by the U.S. Food and Drug Administration to treat epilepsy and have been shown to help many of the one-third of epilepsy patients who don’t respond to anticonvulsive medications. Gracie had the VNS implanted in 2009.

“The VNS helped a little bit but not significantly,” Norman says. “After her recovery from the surgery, we again found ourselves asking if there was anything else we could do.”

The following year, Gracie underwent a corpus callosotomy, a palliative surgical procedure for the treatment of medically refractory epilepsy in which the corpus callosum is cut to prevent the tonic-clonic seizures from occurring across the two hemispheres of the brain.

“That worked really well to control the tonic-clonics and allowed us to go years between them,” Norman says. “After the surgery, we rejoiced that they had stopped, but we were still dealing with the complex partial seizures a couple of times a week.”

During those first seven years of treatment, Gracie transformed from a little girl into a young lady. Her parents and treatment team focused on diet and adjusting the VNS to see if these measures would provide relief, and decided to wait and see if the seizures improved when she went through puberty. Then in December 2014 when she was 12, she had a severe tonic-clonic seizure for the first time in five or six years and was admitted to the hospital.

“We found that she had low sodium issues caused by one of the medications,” Monica Norman says. “Dr. Von Allmen adjusted that medication downward a bit and adjusted the other up a bit for a new medication baseline, and we changed her diet to work on her sodium issues. In 2015 and 2016, we were kind of status quo, with anywhere from six to eight seizures a month, and sometimes we would have good months, with four seizures. My husband and I started asking again, ‘Can we go further to help Gracie?’”

Genetic testing done eight years earlier showed a variant of unknown significance, and more recent testing revealed that Gracie has Cornelia de Lange syndrome, which can be associated with epilepsy and other neurological issues such as intellectual disability.

“When Gracie was 16, Michael and I talked again about whether we’d done everything we could do,” Norman says. “We knew that technology had advanced and asked Dr. Von Allmen if we were pushing the envelope for our child. She suggested we go back to the EMU and take a closer look.”

“Gracie had done a MEG study as part of a noninvasive presurgical workup, which included the EMU monitoring, and the results indicated that she had one or two brain areas that could generate her seizures,” Von Allmen says. “The placement of the SEEG electrodes is based on results from the EMU scalp EEG monitoring, combined with the data resulting from the MEG localization. The SEEG is the invasive step of evaluation that is often needed in complex cases to precisely determine where seizures are starting
in the brain, so that a surgical plan can be confirmed for the final step of treatment.”

The Normans were hoping that Gracie might be eligible for resective surgery to remove the epileptogenic focus, but with more than one brain area generating seizures, she was not a candidate.

“I was devastated,” Norman says. “I was in a place where I was consumed with the thought of her having no seizures, but my husband was more reasonable. We both love Gracie just the way God made her, and we don’t want to take risks that might leave her in a worse condition. We agreed to stop discussing it for 12 hours. I’m a person of faith and prayed about it and got back in line with our original strategy of one step at a time, which we’d followed for 15 years.”

Von Allmen and the epilepsy team evaluated and interpreted the data in a group conference to discuss the best option for treatment. “Gracie had two different foci for her seizures,” the pediatric epileptologist says. “When patients have seizures coming from two different locations, we begin to think about Responsive Neural Stimulation (RNS®-Neuropace), a therapy available to selected patients whose refractory focal epilepsy is not amenable to conventional or laser surgery.”

After considering where they were, how far they’d come and the options taken off the table, the Normans started reading about RNS and decided this was the path they wanted to take.

“Then the pandemic hit and the surgery was pushed back once, but finally we had permission to proceed,” Norman says. “We went nowhere as a family to protect Gracie from COVID-19. My husband is a police officer and had to go to work. He would take off his clothing in the garage and shower. We wanted to do everything we could to get the RNS surgery. Our entire family made that sacrifice for Gracie.”

Shah implanted the RNS device on June 19, 2020, and Gracie was discharged home after three days at Children’s Memorial Hermann
Hospital.

“After we locate the epileptogenic foci, we place the RNS electrodes in a very precise way, so that the stimulator can record the brain’s electrical activity at those points,” Von Allmen
says. “Gracie went home with a computer, and her parents download the data daily to be interpreted by algorithms developed by Neuropace bioengineers. Our success depends on the cooperation of the family and the engineers who monitor the data. Gracie has a lot of seizure activity every day, and the device settings have to be fine-tuned over time to detect onset and stop them with electrical stimulation. It’s a very labor-intensive process, so you have to have a dedicated family to make it work.”

The Normans keep a very detailed calendar of their daughter’s seizure activity. “The first month we didn’t see a lot of difference,” Norman says. “She had a few tonic-clonics after the surgery. She stayed on medication and beginning in July 2020 we took data every single day and sent it to the Neuropace engineers on Sundays, along with a copy to Olga.”

Olga Rodziyevska, PA-C, runs the Pediatric Epilepsy Neurostimulation Clinic at UT Physicians, the clinical arm of McGovern Medical School. At the clinic, she follows patients who have had either a vagus nerve stimulator or responsive neurostimulator implanted.

“Patients with an RNS device follow up every six weeks,” Rodziyevska says. “I review the data with bioengineers from Neuropace and an attending physician before their patient visit. Then we analyze it and, depending on the data and the information the patient provides, we make a decision on the best adjustment for the device depending on how well seizures are controlled with the current settings. We make sure the battery is functioning properly and the settings are optimal for each patient. It’s very labor-intensive, and we work closely with patients and families. We have to consider medication changes, lifestyle changes, illness, stress, and other factors, because we use a systematic approach to achieve the best results.

Gracie and her family are dealing with the process really well. Gracie is pleasant and cheerful, and her parents keep a diary, never miss a follow-up visit, ask questions, have reasonable expectations, and understand that this is a team effort.

Von Allmen calls the improvements in Gracie’s quality of life through technology advances astounding. “We’ve done epilepsy surgeries for a long time to resect the seizure focus,” she says.

“With RNS, we’re still learning about seizure detection parameters, and our patients and parents are part of this learning process. RNS gives us so much more data than traditional EEG and is helping us identify patterns over time. It’s changing how we think about seizures and gives us a whole different window on what it’s like to live with epilepsy over a continuous stretch of time.” Gracie graduated from high school in 2021, along with her twin brother, Jacob, who does not have epilepsy. She participates in the transition adult program at Katy High School for people with disabilities.

She is active in Katy Wolf Pack, a Special Olympics Texas Team that offers a variety of sports activities for individuals with intellectual disabilities. She plays basketball and softball, and loves swimming, dancing, listening to music, and socializing with friends and family. Her parents’ goal for her is to be employed 10 hours a week.

“The RNS has become important to our lives,” Norman says. “Since the device was implanted, we’ve gone from eight or nine seizures a month to three seizures in October 2020, the least we’ve had in years. We’ve started to see a downward slope. She now has an average of four – a 50% reduction in seizures. Since RNS entered our lives, we’re seeing 2.5-week seizure-free runs.

Her vocabulary has expanded. Her behavior has gotten better. With the reduction of seizures has come a better quality of life. It’s not the be-all and end-all. It’s a computer that’s learning as it goes. We are so grateful for the improvement we have. After VNS, we could have sat back and taken the medication, but Dr. Von Allmen has
been with us for 12 years now, and we all share the same thought process: to make sure no stone is left unturned.

At UTHealth Neurosciences, we offer patients access to specialized neurological care at clinics across the greater Houston area. To ask us a question, schedule an appointment, or learn more about us, please call (713) 486-8000, or click below to send us a message. In the event of an emergency, call 911 or go to the nearest Emergency Room.