Esthesioneuroblastoma (ENB), also known as Olfactory Neuroblastoma, is an uncommon malignant tumor of the upper nasal cavity and anterior skull base. It is believed to arise from the olfactory neuroepithelium that lines the cribriform plate, superior aspect of the nasal septum, middle turbinate, and superior turbinate. The olfactory neuroepithelium contains specialized receptor cells that mediate the sense of smell. ENB was initially described by Berger and Luc in 1924, and is now thought to represent a few percent of all malignant nasal tumors. ENB occurs over a broad age range and has a bimodal age distribution in the second and fifth decade, with most patients in their fifties and sixties. It has a propensity to metastasize to neck lymph nodes, and much less commonly to distant areas in the body. There are no known specific causes or risk factors for developing this tumor.

The presenting symptoms depend on the location and extent of the tumor. The most common symptoms are unilateral nasal obstruction, nasal bleeding, headaches, facial pain, and decreased sense of smell. Extension into the orbit may give rise to double vision, proptosis, tearing, and decreased visual acuity. Intracranial extension may lead to neurological symptoms such as changes in mental status, headaches, nausea and vomiting, seizures, and eventually coma and death. Other symptoms include ear pain and serous otitis media, which usually result from the obstruction of the eustachian tube.

Because many of the symptoms associated with ENB are similar to those of inflammatory disease and other benign conditions of the sinonasal cavity, there is often a delay in the diagnosis. In most studies, the mean time from onset of symptoms to diagnosis of ENB ranges between 6–12 months. For this reason, many patients have advanced stage at the time of diagnosis. A high index of suspicion is therefore critical to achieve an accurate and timely diagnosis.

A thorough history and a comprehensive head and neck examination are performed initially. Particular attention should be dedicated to the neck examination considering a significant percentage of patients (5-20%) have neck metastases at presentation. Nasal endoscopy is helpful for evaluating tumor location, characteristics and extent, as well as for obtaining a biopsy.

Computed Tomography (CT) and Magnetic Resonance (MR) imaging are often complementary in characterizing the tumor and extension into surrounding structures, especially the orbit and the brain. High-resolution CT remains the initial study of choice. It provides superior bony definition and allows evaluation of the integrity of bony structures surrounding the tumor, such as the orbit, skull base, septum, and palate. However, all patients with the confirmed or suspected diagnosis of ENB should have both CT and MR imaging with exceptions only applying to very small and localized tumors. The main value of MRI lies in its ability to define the extent of the lesion and the involvement of surrounding structures, especially the orbit, skull base, dura, and brain parenchyma. It also helps differentiate between tumor and adjacent inflammatory changes. This information is critical for proper preoperative surgical planning.

Due to the relatively high rate of neck involvement at presentation, a CT neck with intravenous contrast is routinely obtained to evaluate for occult metastasis. Metastatic workup also includes chest and abdomen CT, as well as liver function tests. Alternatively a Positron Emission Tomography (PET) scan could be obtained to evaluate for regional and distant metastases.

The former limitation has been addressed by Morita et al. who amended the Kadish system by establishing a Stage D for tumors with regional and distant metastasis.

A number of immunohistochemical stains are used to differentiate ENB from other tumors with similar histological features on light microscopy. Typically, chromogranin, synaptophysin, S-100 protein, and neuron-specific enolase are positive with ENB. Cytokeratin, Vimentin, desmin, and actin are usually negative.

In addition, HASH-1, a molecular marker expressed in immature olfactory neurons, was shown to be also present in specimens of high-grade ENB. The significance and usefulness of this marker are still unknown.

Esthesioneuroblastoma is graded according to the Hyams system, based on examination of routine H&E staining under light microscopy. This system has 4 grades ranging from Grade 1, which indicates well-differentiated tumors, to Grade 4, which indicates poor differentiation with no evidence of neuronal or neuroendocrine architecture. There is controversy in the literature about the prognostic significance of Hyams grading, with some studies showing statistically significant correlation with survival, and others showing no correlation.

The treatment of ENB requires a multi-disciplinary team including an Otorhinolaryngologist-Head & Neck surgeon, a neurosurgeon, a radiation oncologist, and a medical oncologist. Other specialists, such as an ophthalmologist, may become involved as needed. At TSBI, we provide expertise in the minimally-invasive and multidisciplinary management of all skull base tumors, including ENB.

Treatment depends on the local tumor stage and whether or not there is regional or distant metastatic disease. Surgery alone is best reserved for patients with small tumors located in the sinonasal cavity without involvement of the skull base or orbit. For more advanced tumors, the most successful treatment includes surgery and radiation therapy with most institutions favoring delivery of postoperative, rather than preoperative, radiotherapy. At TSBI, large and bulky tumors (T3 and T4) are treated with preoperative chemotherapy and radiotherapy followed by surgery. This allows for a potentially less invasive and less morbid surgical resection.

Treatment for ENB changed dramatically with the introduction of the combined transcranial and transfacial approach for tumors of the paranasal sinuses involving the anterior skull base.

The traditional surgical approach for ENB, favored by many institutions and authors, is craniofacial resection (CFR). This is a combined transcranial and transfacial approach, typically including a frontal craniotomy, and lateral rhinotomy or midfacial degloving. The objective is to achieve an en bloc resection of tumor and involved structures. It also involves removal of the cribriform plate, olfactory bulbs, roof of the ethmoid sinuses, medial maxillae, upper septum, and as much of the anterior cranial fossa dura as necessary. The advent of craniofacial resection is credited with increase in overall survival for ENB patients. Although the complication rate associated with CFR has decreased over the last few decades, postoperative morbidity (approximately 35%) and mortality (2-5%) with this procedure remain relatively high.

While traditional craniofacial resection remains the gold standard, less invasive endoscopic techniques have become increasingly utilized. At Texas Skull Base Physicians, we provide expertise in minimally-invasive endoscopic management of all skull base tumors, including ENB. Minimally invasive endoscopic resection (MIER) is a complete endoscopic approach, typically suited for tumors that have not invaded the brain tissue. Endoscopic-assisted cranionasal resection (EA-CNR) combines craniotomy with a transnasal endoscopic approach and typically addresses large tumors that have invaded brain tissue. There are distinct advantages of MIER and EA-CNR over traditional CFR. State of the art videoendoscopy suites and new generation high definition cameras and monitors provide the endoscopic surgeon with unparalleled illumination, magnification and image resolution. This allows the surgeon to better judge tumor origin and boundaries therefore facilitating maximal resection while preserving uninvolved structures. Endoscopic techniques allow great access to anatomic areas where external approaches are notoriously known to fail, such as the sphenoid sinus region and frontal recess. In the postoperative period, the endoscope plays an important role in tumor surveillance. Finally, the endoscopic approach obviates the need for disfiguring facial incisions.

Endoscopic techniques have now been shown to have comparable success rates but fewer complications compared with traditional CFR.

At TSBI, Computer-Aided Surgery (CAS), also known as Image-Guided Surgery (IGS), is routinely employed in all tumor resections. The availability of advanced CT/MRI fusion and 3-D reconstruction protocols enhances the safety and outcome of our interventions. 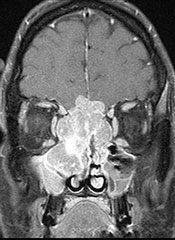 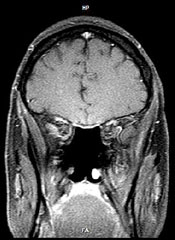 Endoscopic examination of the sinonasal space 2 years after treatment