Amber Luong, MD, PhD
Chronic rhinosinusitis (CRS) is the most prevalent chronic disease affecting over 33 million Americans annually, according to the Centers for Disease Control and Prevention. The socioeconomic impact translates into over $5.8 billion dollars spent for the treatment of sinusitis and on average four work days missed a year per affected person. Despite its prevalence and socioeconomic impact, we have little understanding about the pathophysiology and hence a poor appreciation of the effective means of treating this disease.

Allergic fungal rhinosinusitis (AFRS) represents one severe type of CRS characterized by nasal polyps and a thick, mucin debris filling the sinuses. Its geographic distribution, more prevalent in warm humid environments, places Houston with a large population of AFRS sufferers. This disease is often recalcitrant to our current medical therapy and therefore patients are often faced with multiple surgeries.

Despite its name, little is known about the pathophysiology of this disease. The disease was named allergic fungal rhinosinusitis because of its clinical similarity to a lung disease also characterized by thick mucinous debris. Initial data from our lab supports the role of fungal antigens in the activation of AFRS.3 In addition, we found that fungal antigens in patients with AFRS triggered a release of certain molecules consistent with an allergic inflammatory response. Taken together, this is the first data directly supporting an allergic response to fungal antigens in the pathophysiology of AFRS.

Our our goal is to elucidate the molecular pathways leading to this allergic immune response in AFRS. Thymic stromal lymphopoietin is released from respiratory cells and directs immune cells to trigger an allergic immune response. This molecule is the link between the epithelial cells that are bombarded by antigens and the subsequent allergic inflammatory response. We believe that the TSLP pathway may also play a role in AFRS.

Using AFRS as a model for understanding CRS and the immune response within the nose and paranasal sinuses, we hope to identify molecules for which more specific pharmacologic therapies can target. 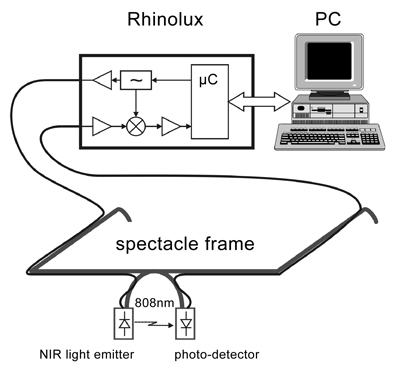 Schematic representation of the Rhinolux

Nasal provocation testing (NPT) represents a direct means of evaluating the nasal end organ response to suspected inhalant allergens. The antigen is introduced into the nasal cavity and response in terms of nasal mucosal swelling is then monitored. In a positive hypersensitivity response, the nasal mucosa swells from the influx of venous blood and the cross-sectional area of the nasal airway is reduced. In most European countries, NPT is well standardized and is incorporated into the clinical evaluation of inhalant allergies.¹ The clinical use of NPT in the United States has been limited. Rather, the diagnosis of allergies has relied primarily on history and either skin testing or measurements of serum allergen-specific IgE levels.

Inhalant allergies are first suggested by a clinical history of allergy symptoms such as rhinorrhea, sneezing, watery/itchy eyes, and nasal congestion. For confirmation and identification of inciting allergens, patients undergo either skin or blood testing (modified radioallergosorbent test (mRAST)). Several investigators have argued that skin test results have unreliable correlations with nasal challenges unless coupled with serum IgE levels in a patient with allergic rhinitis symptoms.² Given limitations of skin testing and mRAST for the diagnosis of clinically relevant inhalant allergies, NPT represents an alternative diagnostic tool for inhalant allergies. 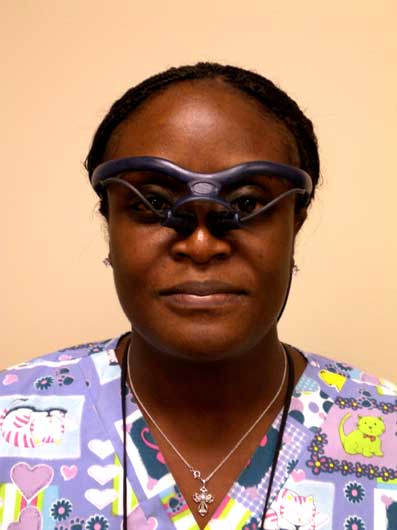 The response to NPT is typically assessed by acoustic rhinometry or anterior rhinomanometry. Acoustic rhinometry transforms the analysis of a sound pulse within the nasal cavity to an area-distance plot. However, this technique involves placement of a tube within the anterior aspect of the nasal cavity and malpositioning of the nasal tube can lead to distortion. Anterior rhinomanometry measures the pressure difference between the nasopharynx and the naris and unilateral air flow to calculate the nasal resistance to airflow. Although well standardized, it is not valid in subjects with septal perforations or unilateral complete obstruction.

Optical rhinometry has recently been introduced as a means of assessing nasal airway patency. A wavelength light emitter and an optical sensor are placed across the nasal bridge. One of the 3 wavelengths emitted, 800-nm, corresponds to the isobestic point of hemoglobin. Consequently, changes in hemoglobin within the nasal tissue is measured independent of its oxygenation state. Hemoglobin levels within the nasal tissue provide a means of assessing nasal congestion. Rhinolux (Rhios GmbH, Germany), one such optical rhinometer, assesses nasal airway patency by detecting changes in blood flow into the nasal mucosa.

This image depicts the optical rhinometer. A) Schematics of the optical sensor which consists of an optical emitter and detector that resides in the nasal pieces of a spectacles-like frame B) Optical sensor is placed across the nasal bridge during measurements.  This is a graphic representation of readings from the optical rhinometer in allergic subject undergoing nasal challenge with histamine and then oxymetazoline in one nasal cavity followed by histamine challenge in the contralateral nasal cavity. 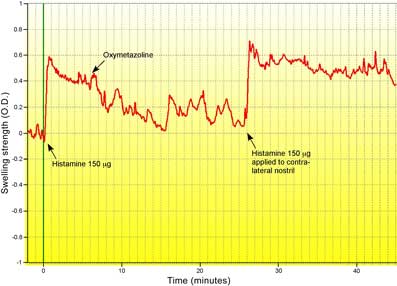