Researchers at UTHealth Medical School and Baylor College of Medicine have published the results of an important new study that may lead to improved treatment for chronic rhinosinusitis (CRS) and other inflammatory diseases. The article, which appeared in the August 15, 2013, issue of the American Journal of Respiratory and Critical Care Medicine, demonstrates for the first time the functional importance of innate lymphoid cells in Th2-mediated inflammatory disease in humans, which may lead to novel treatments for a range of diseases [1]. 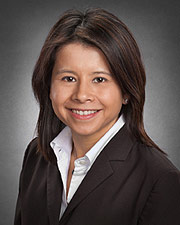 “The aim of our study was to investigate the role of the epithelial cell-derived cytokine interleukin-33 (IL-33) and IL-33-responsive innate lymphoid cells in the pathophysiology of chronic rhinosinusitis,” says senior author Amber U. Luong, MD, PhD, an assistant professor and director of research in the Department of Otorhinolaryngology-Head and Neck Surgery who directs a laboratory at the Brown Foundation Institute of Molecular Medicine for the Prevention of Human Diseases at UTHealth Medical School. “From previous studies in an animal model we know that IL-33 plays a key role in the development and regulation of a Th2 immune response, mediated by an IL-33-responsive innate lymphoid cell population, but until now there was little direct evidence of an important role for these cells in Th2-mediated inflammatory disease in humans. In this study we were able to show that the percentage of innate lymphoid cells is significantly elevated in diseased mucosa in chronic rhinosinusitis with nasal polyps – a Th2-mediated inflammatory process – and that these cells represent a consistent and potentially important source of IL-13 in response to IL-33 stimulation.”

The implications of the study are potentially enormous. Chronic rhinosinusitis affects more than 30 million people annually resulting in direct healthcare costs of more than $5.8 billion yearly, making it one of the most expensive non-fatal diseases to manage. Over the past decade lack of understanding of the pathophysiology of CRS has resulted in few changes in treatment: most patients can expect generic treatment involving extended use of antibiotics and steroids and repeat surgeries.

Dr. Luong’s study is one of a handful to identify a human disease in which the IL-33 pathway is important. In the same study, the researchers also found that epithelial cells release IL-33 upon challenge with fungus.

She was a collaborator in a related study at Baylor College of Medicine (BCM), the results of which were published in the August 16, 2013, issue of Science [2].  Led by David Corry, MD, a professor in the Departments of Pathology & Immunology and Medicine-Pulmonary and Critical Care at Baylor College of Medicine, the research team described how fungus signals through epithelial and immune cells. Through their protease activity, fungus cleaves fibrinogen-releasing degradation products that can bind and activate toll-like receptor 4. They found that toll-like receptor 4 does not directly activate T cells but instead leads to the expression of the IL-13 receptor, causing the typical symptoms of asthma and suggesting a connection between fungal infections and asthma. Dr. Luong confirmed their observations in humans.

The article in Science was cited in the Journal of Allergy and Clinical Immunology [3],  noting that “allergic inflammation represents in some individuals an appropriate antifungal strategy while in others a purely pathologic process that may be treated using entirely new approaches.” Dr. Luong’s lab is engaged in further investigations using fungus in humans to determine if this pathway is important in the activation of the immune response.

“Formerly we thought of epithelial cells as protective, forming a barrier to outside agents through selective absorption,” Dr. Luong says. “What we’re finding is that epithelial cells play an active role in stimulating the innate and acquired immune response to viruses, allergens and other environmental triggers. In fact, they may be the initial domino that sets off the allergic response. The results of our studies are encouraging for patients with inflammatory disease – developing therapeutic strategies that target epithelial cells is likely to be easier than targeting other types of cells.”