By the time 27-year-old Reginald Durden saw oral and maxillofacial surgeon Nagi Demian, DDS, MD, the ameloblastoma had destroyed his lower jaw. Three surgeries later, Durden has a normal appearance, with scars that are barely visible, and he can talk and chew easily. 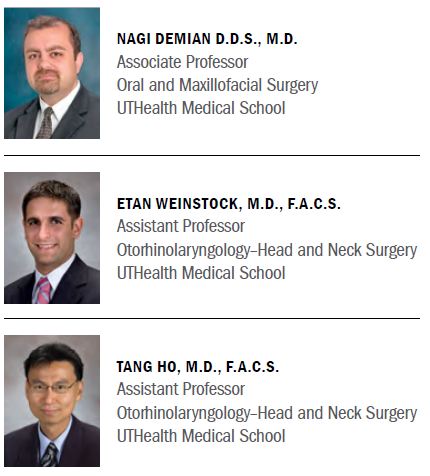 Excision of the rare, slow-growing tumor and subsequent reconstruction of Durden’s lower mandible is a story of multidisciplinary collaboration between three surgeons affiliated with the University of Texas Health Science Center at Houston and Memorial Hermann-Texas Medical Center: Dr. Demian, an associate professor of oral and maxillofacial surgery; Etan Weinstock, MD, FACS, an assistant professor of otorhinolaryngology—head and neck surgery; and Tang Ho, MD, an assistant professor of facial plastic and reconstructive surgery in the Department of Otorhinolaryngology—Head and Neck Surgery. “Because ameloblastoma easily infiltrates and destroys surrounding bony tissues, extensive surgical excision is usually required,” Dr. Demian says. “Reginald’s tumor was large, involving 10 centimeters on both sides of the lower jaw, and it was aggressive. When I first saw him, he had developed extreme asymmetry of the face.”

Classically, few physicians crossed departmental lines for the benefit of the patient. “Today, we’re seeing more interdepartmental collaboration,” Dr. Demian says. “It was clear from my first examination of Reginald that his case would involve a large reconstruction, which would result in a better outcome if oral and maxillofacial surgery, otorhinolaryngology and facial plastic and reconstructive surgery worked together from the start.”

Because they both treat head and neck cancer patients at Lyndon B. Johnson General Hospital, where Dr. Demian is chief of oral and maxillofacial surgery and Dr. Weinstock is chief of otorhinolaryngology, the two surgeons are accustomed to working together to minimize patient trips to the OR. “Each of us has his own specialty and particular skill set, and many of the patients we see require a combination of the two,” Dr. Weinstock says. “We collaborate well, because each of us understands what the other brings to the table. We’ve both become very astute at recognizing when we need to combine forces to produce better outcomes. Together, we’ve done many, many hundreds of cases.”

Durden’s surgery was planned in advance using virtual technology. Because reconstruction would require removal of a segment of the fibula and surrounding tissue and reattachment of the vascular pedicle to the neck, the two surgeons involved Dr. Ho in the case. Using a specially designed virtual surgery planning system and working with a systems engineer in another location, the three physicians teleconferenced remotely on their laptops to map out the procedure using computer simulation.

“What we were planning was essentially a transplant procedure – transplanting Reginald’s fibula and reshaping it to create the new mandible,” Dr. Ho says. “In the process, we have to revascularize the transplanted bone and soft tissue using microvascular surgical techniques under the microscope. Before we had the capability to simulate the surgery using multidisciplinary pre-surgical planning, we had to make multiple bone cuts and continue to reshape them to fit the jaw, which is a time-consuming process. Once tissue has been removed from the leg, we’re in an ischemic time crunch. We want to inset the pedicle in the new location and revascularize it within two hours. With virtual surgery, we can review CT scans of the patient’s leg and face, create 3D models and rotate and manipulate them on the screen. Then we go to the OR with predesigned cutting guides for the fibula that show us exactly where to cut and how much of the leg bone to take, so that we can shape the new mandible as it should look. Preplanning shaves hours off of a very long procedure.”

In November 2011, Dr. Demian did a resection of the ameloblastoma from Durden’s lower mandible through the inside of the mouth, a more difficult approach that avoids external incisions and neck tissue dissection, and provides virgin territory for the larger reconstructive surgery. The net result is cleaner tissue planes and no scarring, which is beneficial to the patient. After the ablative surgery, Dr. Demian placed a temporary plate to replace the large missing segment of jawbone.

While his jaw was healing, Durden remained on a soft-food diet. “It was a very difficult period of time for many reasons,” he says. “I had a newborn son to help care for, and I couldn’t talk or eat normally. I was able to chew a little on the right side of my jaw, where they left three molars. On the left side I had only a plate for a jaw. During that time I lost a lot of weight.”

The reconstruction was the largest of the three surgeries. “Dr. Ho attached the plastic guides to the fibula showing the angle and depth of cuts we needed to make,” Dr. Weinstock says. “While he was working on the leg, I opened the neck working with Dr. Demian, who made sure the remaining teeth were in alignment. Although Reginald had a dramatic resection of the mandible, my job was made easier because Dr. Demian had resected the tumor through the mouth, and the neck was untouched. I dissected out the blood vessels to prepare the mandible and recipient bed for the free flap, and we started our ischemia time. Dr. Ho divided the pedicle from the leg and moved it to the neck, and Dr. Demian helped me align the flap and adapt it to the plate and contour as we had planned. Using a microscope and tiny sutures, Dr. Ho reconnected the arteries and veins we took from the leg to the arteries and veins in the neck. By working simultaneously, we reduced the amount of time the patient was under anesthesia. Everything happened quickly and precisely with minimized ischemia time, which improved the chances of survival of the graft.”

In a third surgery performed in the fall of 2012, Dr. Demian placed dental implants, which were adjusted in early 2013. A denture that clicks over the implants gives Durden good structural stability so he can eat and speak well.

“It was a very difficult experience,” Durden says. “Imagine hearing that you’re going to lose your teeth and jaw. After my initial shock, my doctors made me feel comfortable by explaining everything that would happen. I knew it would be a long process and that I would have to take it step by step to get back to normal. They did an amazing job. When people see me today, they can’t believe I went through all that.”

“Reconstruction of the mandible is a very precise surgery, and virtual preplanning increased our level of precision,” Dr. Weinstock says. “It was a long and frightening experience for Reginald, but the outcome was perfect. It’s an excellent example of the value of multidisciplinary pre-surgical planning in improving patient safety and optimizing the overall surgical outcome.”